Latest Trends
dear sweet mom who feels like she is...
just do the dishes. please. the kids will...
to my kids – the raw truth of...
a mom that shows up
to the mom who lost her heart
i forgot how to be the happy mom
what single moms need friends to know during...
to the mom who keeps going
2020 Mindset Goals
the lesson of the fallen Christmas tree
Home Celiac Disease and for now — i wait and wait and wait
Celiac Diseasegluten freeSamuel

by Rachel Marie Martin
0 shares
That was exhausting.
I had no idea.
{It’s probably a good thing I didn’t know what the day had in store.}
We arrived at Children’s Hospital at 12:45 and finally pulled out of the parking garage at 4:05.
Your prayers? Completely felt.  In fact, when Samuel’s doctor walked in the room he asked,
“does he like to be called Samuel or Sam?”
and I told him either was fine
to which he replied,
“Samuel is a great BIBLICAL name.”
That made my nervous heart rest.
{I knew we were on the same page.} 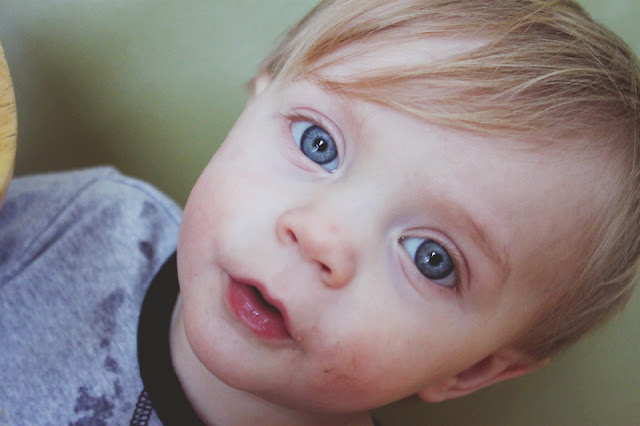 {Samuel — yesterday}
And that doctor? Wonderful. I trust him. He knew Samuel’s case before I arrived as he had studied all of his labs and doctor notes from before. He was thorough and kind. I talked with him for almost 90 minutes before he even began to examine Samuel. After his evaluation he sent us down for a chest x-ray — this time it needed to be perfect so we had to strap Samuel down — but I was there and he didn’t cry.
The hardest thing for me to see was the lab draws.  The tech was very concerned that there were too many draws/tests and that the amount of blood drawn might be too much for his 21.5 pound body.  Those were words that I didn’t need to hear. But, Samuel, sweet Samuel he did great. He didn’t fuss once as the tech worked. He pointed at the frog banner on the wall and even leaned over to give me a kiss.  By the end he was pretty clammy — and yet — he managed to give the tech a scrunchy wave goodbye.
Why so many tests? My mind wrestles with the 2 foot sheet of labels for the various vials. And yet, I know it’s because his doctor is looking for answers. And that they need to be found. The results will slowly trickle in over the week — and I have a repeat consult with the doctor next Monday. The same day that we see his GI Doctor. {I think my nerves will be going crazy on Sunday as some of the waiting will be ending soon.}
The next time Samuel gets a fever he is to immediately go to his clinic or the Children’s Hospital for another chunk of lab draws. They need to see the difference between well and ill.
Until then?
I wait.
And praise God for His goodness in blessing me with such a great doctor.
For health, and friends, and the start of answers.
Thank you for your prayers.
I needed them.
0
FacebookTwitterPinterestRedditEmail

What wonderful care Sam is getting. There are so many things it seems that are going “right” (with Doctors etc.) even while there is the large “unknown” waiting for you. Prayers on your journey to get Sam well again!

I’ve been anxiously awaiting your day’s report. Praise Jesus for a good, thoughtful and thorough doctor! That makes all the difference. Oh, what a sweet boy you have – he was so well behaved. I’ll keep praying. And please keep updating as you learn more and more. You’re one tough mama. I’m also curious to hear about how Monday night went. : )

Yea! I will continue to pray for you all.

so happy to hear your confidence in your doctor…I’ve found that is an amazing anxiety reducer…I will pray peace over you guys the next week…I am scrapbooking the last year and my cancer journey this week and I just finished the page about all the tests and how long we had to wait at doctors offices ect…I know it is SO draining!
get rest, and take care of YOURSELF!

What a blessing to have that doctor today. Blessings like that are what my old pastor would call “kisses on the cheek from God” 🙂

What a blessing to have him walk in and say that to you…a God send for sure! Stay strong and hold tight to your feelings, answers will come, blessings to you 🙂

It would have been awesome to run into you.

My little guy is not going through the same things Samuel is, but you are a faithful mama!
And he is such a trooper!

Oh, AND we have a faithful God!

take care.. i am speechless… you are a strong and beautiful mother.. i am praying…

I am so thankful God provided the right doctor for your Samuel. And though you wait, the answers will come. Praying for a restful, peaceful heart for you, peace, strength and healing for Samuel.

Every picture of Samuel is so amazing! He’s such a precious little man!
Lifting up prayers to the Only One who can answer!
Psalms 4:8 I will both lay me down in peace, and sleep: for thou, LORD, only makest me dwell in safety.
Prayer Bears
My email address

And I will continue to pray. Sweet Samuel…such a strong little guy. Such an amazing God!

I have been following this journey for a while now. And man, the similarities to my life are crazy. Lets just say that I have a GI consult on Monday too! & waiting for final results on celiacs and other labs. Your joy is very contagious!