Latest Trends
dear sweet mom who feels like she is...
just do the dishes. please. the kids will...
to my kids – the raw truth of...
a mom that shows up
to the mom who lost her heart
i forgot how to be the happy mom
what single moms need friends to know during...
2020 Mindset Goals
to the mom who keeps going
the lesson of the fallen Christmas tree
Home Find yourself she was me
Find yourself

Last year I was in Washington, DC, standing in the front of a conference room speaking to several hundred moms. I was ready. I had slides, with pretty pictures and beautiful quotes and words written on notecards, all prepared, by me, for my sixty-minute speaking slot.

I looked confident, I’m sure. After all, I spent enough time getting ready.

That morning, before I was set to speak, I went through the entire “what to wear” outfit drama and ended up spending more time on what to wear then going over my slides. I’d try one on, look in the mirror, pivot, find the flaw, throw it on the ground and proceed to try the next one I had packed in my suitcase. My outfit insecurity has made me an efficient packer as I understand the strategies to stuff way more in preparations for the “nothing works” moment. That morning, despite being the speaker on the kick-butt places of motherhood, I questioned myself wondering if I really had anything to share.

Finally, after dismantling my suitcase, I chose my outfit. The irony is the “chosen outfit” is typically the first one I try on. But because I understand my quirks, I pack extra, and work through the cycle of options in my bag to realize, once again, that I already had what I needed.

Thirty minutes later, standing in the clothes that fueled my confidence, I sat in a chair off to the side, listening while the host introduced me. My hair in the picture was different than the color it was now. I noticed that. I wondered if others did, and glanced back at the room, looking at everyone sitting there, waiting.

Some had strollers and babies on the hips. Others were grandmas. Some were dressed up, some in yoga pants. Some drank coffee, others sparkling water. Some sat with a group of friends, others alone. No one seemed to care about the hair, even though it seemed so obvious to me. Instead, in that moment of pause, I saw a commonality amidst the differences – motherhood. All the women sitting there, giving up of their time, dragging their kids or friends, or themselves didn’t come for any other reason other than to have their motherhood story revived. It was a room of expectation, of hope.

I kept watching them as I walked up the stairs, onto the stage.

Everyone was holding their breath.

I mean, obviously, there weren’t any blue faces in the room. But there was this sacred space of possibility, of potential. They were looking at me. Me, in the first outfit I tried on, but they didn’t know I went through five others to get back to that first one. They didn’t know that I noticed the hair color difference and wondered if they did.

They saw me as someone with the answers.

(that’s a blurry picture of me. I look like I was praying. I probably was….) 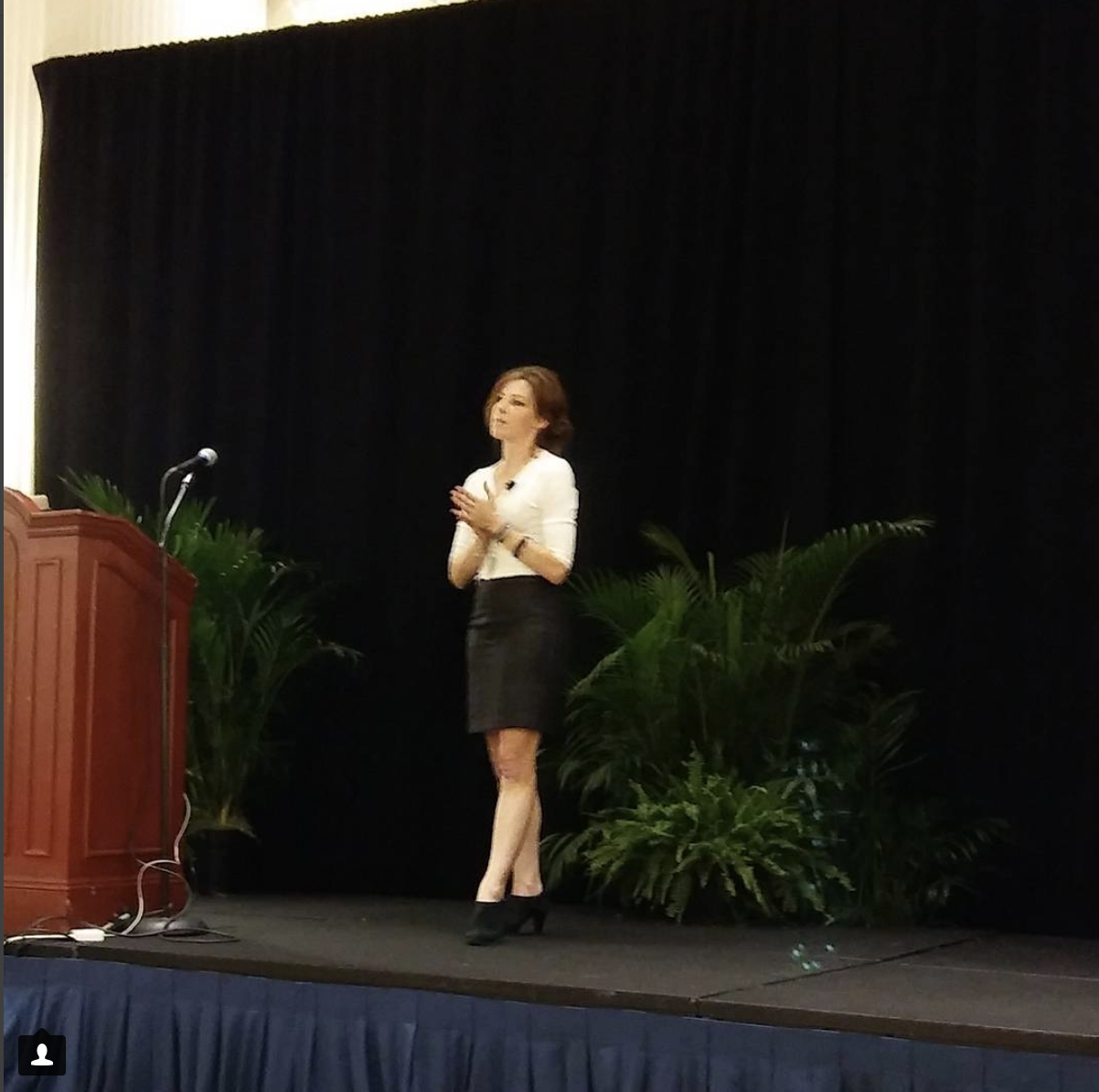 Yet, just a half hour before, there I was wondering if I had anything to say that would really matter to everyone. They didn’t know that either. So I looked at my notes, looked back at them, exhaled, as a collective breath for the room and decided that on this morning I didn’t care about having it together, or the answers, but instead, this morning this room needed to hear a story.

A story of redemption.

With my heart pounding, I put down my notes, left my first slide up and began sharing a story of a mom who had seven kids, who lived overwhelmed, who worried what others thought of her, who once had the IRS knocking on her door, whose bank accounts were negative, who was in a broken marriage and felt without options. I described in detail her fears of others discovering her mess and how hard she worked to keep everything together. I shared how she got knocked down and yet how she stood back up, over and over.

I shared how she tried so very hard in motherhood, gave so much for her kids, but in all the giving forgot about herself. Then I spoke about how she navigated divorce and lost almost everything, and yet despite thinking she would never make it, in the losing, the letting go, she ended up whole.

I told them how for so long this mom was ashamed of her story, of the hard parts, of the places of falling. I explained the doubts she battled, but told them that there came a moment when this mom, the one who felt like life was just passing by, changed one thing.

One day, this mom, decided to no longer sit back and let time pass her by. She dared to dream again and in the dream she no longer sat back, but clawed for every minute of time in her life. She opened her laptop and instead of surfing around, started to write about her life, about motherhood, about the struggles and the joys and about what it feels like to lose one’s heart and dreams.. She dared, outside of the normal of her world, to be real, to spread hope.

This mom wrote and wrote and wrote. I told them that so often her words felt lost, like no one was reading them, like she was the only one that felt that way, like they didn’t matter, but despite the doubts in her mind, she kept on writing.

You could have heard a pin drop in that room.

Then I introduced that room to the mom, the mom of the story who thought she never would find happiness, joy and purpose again, but with grit and faith did. The mom, the writer, the one with hope.