Latest Trends
dear sweet mom who feels like she is...
just do the dishes. please. the kids will...
to my kids – the raw truth of...
a mom that shows up
to the mom who lost her heart
i forgot how to be the happy mom
what single moms need friends to know during...
to the mom who keeps going
2020 Mindset Goals
the lesson of the fallen Christmas tree
Home motherhood let them push the cart
motherhood

let them push the cart

Part of my routine with my children is to take some of them with me when we do our massive grocery run. I do this trek – through Costco, Trader Joe’s, and then Target and it takes a great deal of time. But, it’s also become one of those things that they look forward to – so much so that I actually have to keep track of whose turn it is next otherwise I’ll deal with the it’s my turn argument. So, on my phone I’ve actually started a chart. 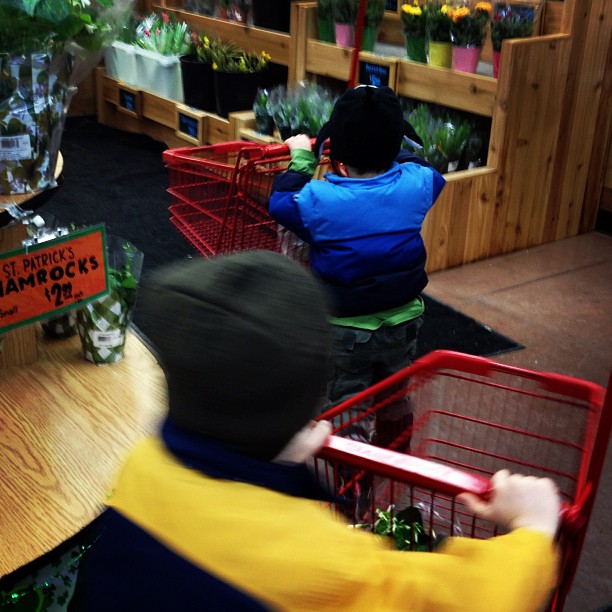 The other day when we went shopping the two little boys came with to help. First of all, it reminded me of the days when I only had the littles and how hard that journey can be. It is hard. Oh my goodness they are both independent, but also not quite wanting to follow all the rules and did I mention that they are three and five? So sweet moms that are reading this with those little ones right now and you go shopping and all of that let me be the first to stand up, clap, and tell you that you are amazing for all you do. Well done. 🙂

Anyways, at Trader Joe’s they have these teeny miniature shopping carts with tall flags on the top (always be on the lookout for those – those flags are like little warning signals that an unexperienced and super fast driver is making their way through the store) that both boys wanted to push. At first I thought about them sharing, but the look of joy and glee on their face was just too much for me to say no. So, I did it and let them each get a cart. And did I mention that they both like to move very fast? And that they’re both quite strong-willed? 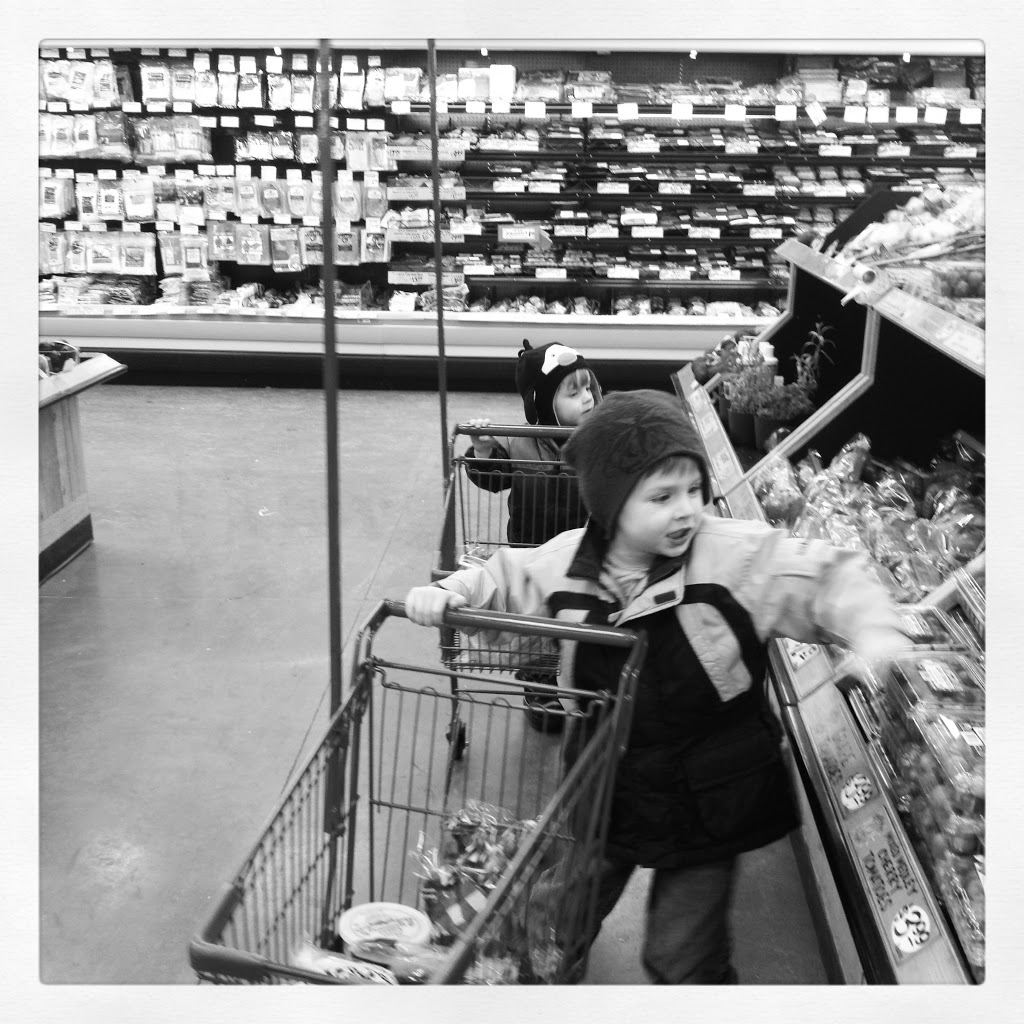 Those two little boys marched through Trader Joe’s as if they were on a mission. They were determined to grab bananas and chips and whatever they fancied, but more than that, they felt big. They needed that cart pushing moment. They needed to know that I thought of them as big enough and would bless them with the opportunity to feel grownup.

It was work. And I don’t do it every single time because, well, truthfully, most times I don’t have that much patience to try to cart wrangle two of them at once. But, yesterday, it was worth it.

Part of parenting is letting go and letting them grow up. I know that cart pushing might not seem like the biggest growing up moment, and yet it was – it was me telling them I trusted them, and believed in them, and I let them have the moment. 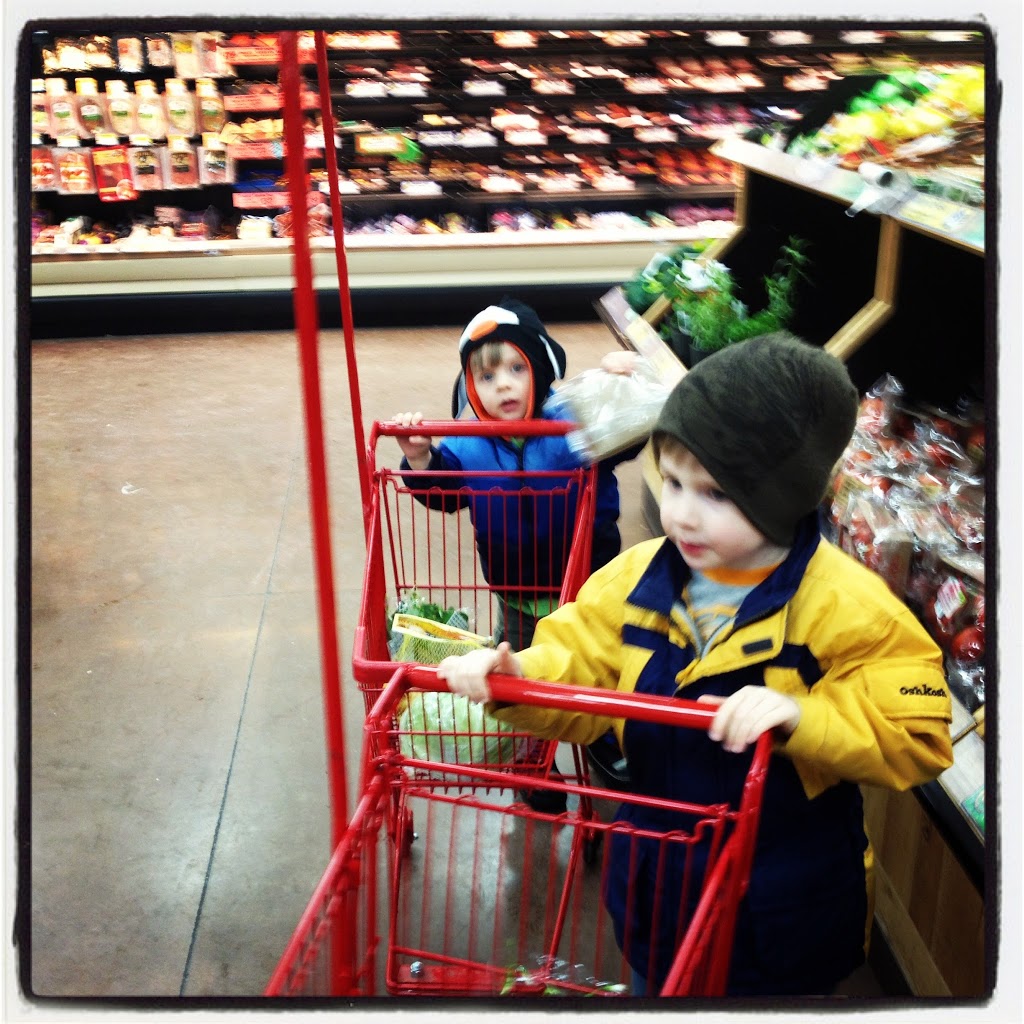 Let them push the cart.

Or ride in that blue car in front of the cart. Just bring your hand sanitizer and be prepared to say excuse us and no, not that, and turn left and all of that while you’re doing it. Get yourself Starbucks when you’re done. But do it once in a while. It will be a favorite thing.

Want to know how I know? Last night, at dinner when we were talking about the best part of the day, my Elijah proudly said, when I went shopping and pushed the cart all by myself. 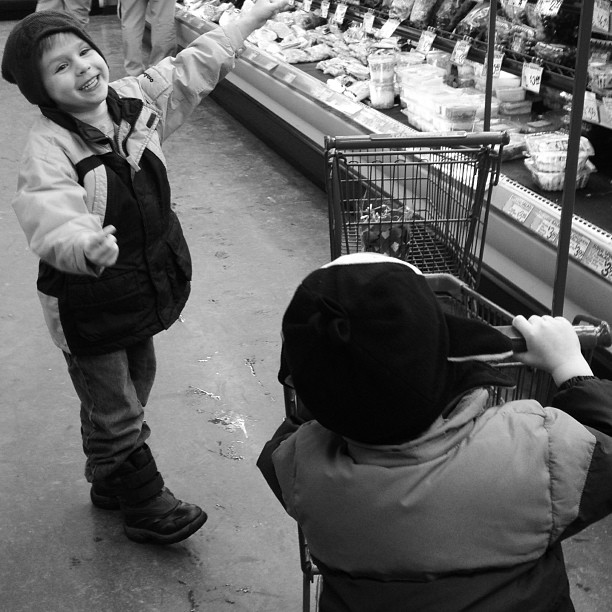 That story, that hour in Trader Joe’s was a favorite thing. Some day I will look back and these pictures snapped with my iphone and I will be grateful. I’ll be grateful for the moment captured and the joy on their faces from pushing little red carts through Trader Joe’s. I wouldn’t trade chasing them around, making sure they didn’t take out the displays with their terrific cart speed, for anything. Nothing.

I love this post. I think you’re right. Things like this that seem like a potential disaster to us can be such confidence boosters for our children. My boys LOVE to push the little carts at Trader Joe’s. It doesn’t always turn out well, but those times are getting fewer and farther between. I love the look I see on their faces when I ask if they would like to push their own cart. 🙂

So very cute! What an adventure!

Great post! My son pushing the cart is one of the highlights of our trip to Trader Joe’s!

I love that I’m seeing more child sized carts in stores. In my opinion, children need more of this type activity when they are young and less of a push to academics. Teach them to take care of themselves and their surroundings. The book learning will come in good time!

This is so sweet, and you’re right – sometimes it’s worth it to just let them do it and chase them around, because you never know when you’re giving them an opportunity to create a lasting memory. Who knows what our kids will remember as they get older?

My son is barely a year old, but he loves it when I hold him so he can push the cart through Target. It’s the cutest thing. That kid’s got a grip!

It’s ultimately the little moments in life, just like this one … 🙂

I love this post too – and I do go to Joes and let my 4 and 3 year olds push their own little red carts. Most of the time we manage to avoid total disaster. I’m nervous as a cat on a hot tin roof the whole time, but they love it so. Thank you for writing – every post makes me remember why I’m doing what I do, warms my heart, and gives me courage to keep on trucking!

Such a great post! It’s true how small, simple moments can be so memorable. Love it 🙂

This is just so precious. Thank you for the reminder to allow the moment to happen… even when you would rather take the easy way out. Those moments store up in their little hearts and matter. We (painstakingly) go through the “Self Scan” every . single. time. so my kids can ring up all (ALL) the grocery items on their own. Sigh…

I LOVE this! I have a 5 yo, 3 yo, 18 month old and a husband deployed in the Navy…every outing is a challenge! Every week after church we stop and shop at Trader Joes and my kids LOVE those little carts. It is usually 30 mins of frantic chaos control for me…thanks for reminding me it’s worth it!

This is so what our day was – although in another country – 2 boys same ages both strong-willed. And it was such a holy moment for me today; to be clothed with patience & just seeing how tall they stood as they helped!

Great post! Now, I only wished I had a camera with us too!

Love that you have 7 kids… I find that to be a “perfect” number as well…. And I hear ya on the phone chart…. Creativity must come after birthing the 5th LOL

Well I’m glad I’m not the only one that shops at gazillion stores just to get what we need! Right now my hubby does the food shopping, on his way to pick up milk once a week at a local farmer. But that’s only because I have a 15 month old and he is no fun at the store. Once the kids are older I’ll be doing it myself and it’s going to look a lot like this 🙂 Though we may have less kids, maybe 😉

I wish my Trader Joes had the mini carts! The only grocery store that I know of that has them is Scolari’s. However, my Trader Joes ALWAYS has good stickers for kids. It’s a nice motivation for my kid to behave while we shop. Sometimes, if her behavior is iffy, I’ll freak her out by asking the cashier if she was good enough for stickers, as if the matter is out of my hands 🙂

They grow up so fast! Thanks for the lovely post & for hosting & God bless!

Would it be better if you took an older child and a younger child? I always had kids fighting over going with me to the store, too! Never thought of actually keeping track!
Lifting up prayers!
Deuteronomy 31:6 Be strong and of a good courage, fear not, nor be afraid…for the LORD thy God, he it is that doth go with thee; he will not fail thee, nor forsake thee.
My email address

i love this. i try and do a big shopping trip on sundays. my older 2 have started taking part of the list and making it a scavenger hunt! so fun. my youngest (3) loves to push her own cart. last week though, not so fun! the girls wanted their own carts and fought the entire time over who had more in their cart! oy! the things they can find to argue over. thank you for reminding me that even though it wasn’t the best day out, it was an experience for them and they love it! even when they are arguing;)

I’ve said it before, and I’ll say it again. You are such an inspiration. I have just one 7 year old boy, and shopping with him sometimes is enough to make me tear my hair out. He always wants to push the cart, and there are those days he thinks it’s a Nascar race, and at every intersection I am sure someone is going to get crushed. It frays my nerves, but he loves it so. I can’t even guess how to just let it be….

Whatever happens keep your eyes on the Lord! Praying!
Psalms 62:1-2 Truly my soul waiteth upon God: from him cometh my salvation. He only is my rock and my salvation; he is my defence; I shall not be greatly moved.
My email address

Thought I saw on FB that there was a new post…guess not?
The Lord is always with you! Praying!
Psalms 62:5-8 My soul, wait thou only upon God; for my expectation is from him. He only is my rock and my salvation: he is my defence; I shall not be moved. In God is my salvation and my glory: the rock of my strength, and my refuge, is in God. Trust in him at all times; ye people, pour out your heart before him: God is a refuge for us. Selah.
My email address