Latest Trends
dear sweet mom who feels like she is...
just do the dishes. please. the kids will...
to my kids – the raw truth of...
a mom that shows up
to the mom who lost her heart
i forgot how to be the happy mom
what single moms need friends to know during...
to the mom who keeps going
2020 Mindset Goals
the lesson of the fallen Christmas tree
Home motherhood they don’t stay little forever
motherhoodonward brave mother

1.6K shares
My house was quiet – except for the typical hums of the night – the fridge and the air conditioner – and the sound of laughter trickling upstairs as my teenagers watched the original Star Trek series downstairs on the oversized couch in our family room. It was night, that time where I sit down and work and work and work. I love those late nights – it’s time for me to think, to process, and to simply write my heart. And to catch up on the to-do list of things that never quite seem to get finished during the day.

It was Samuel. Standing at the top of the stairs in his little orange striped shirt and hair sticking up everywhere and in his arms was his John Deere quilt that he won’t go to sleep without. It’s the one that I have to wash in the morning so that it is dry by the time he goes to bed.

I had bad dream.

The writing stopped. As I walked up the stairs to that almost four year old son of mine I chose to let go of the to-do list that has been breathing down my neck since returning from Haiti and the lake.

Do you want me to hold you, Samuel?

And with that, that little 36 pound body rushed into my arms, and as he did my heart rested content in knowing that those minutes spent holding him mattered more than the list or the clean kitchen or the laundry that I should have been folding.

Motherhood is a beautiful balance of knowing when to simply put the 3 1/2 year old back to bed and when to stop the agenda and embrace the moment of holding your little one in your arms.

I held him. And he giggled and burrowed his head in my arms. And told me I was the best momma ever.

I don’t really know if he had a bad dream. But, I didn’t care, really.

It’s easy to lose those moments when the to-do list overwhelms. Or, for me, it’s easy to not embrace that those are the motherhood moments that matter when I wake in the morning and see everything that I didn’t get completed the night before. 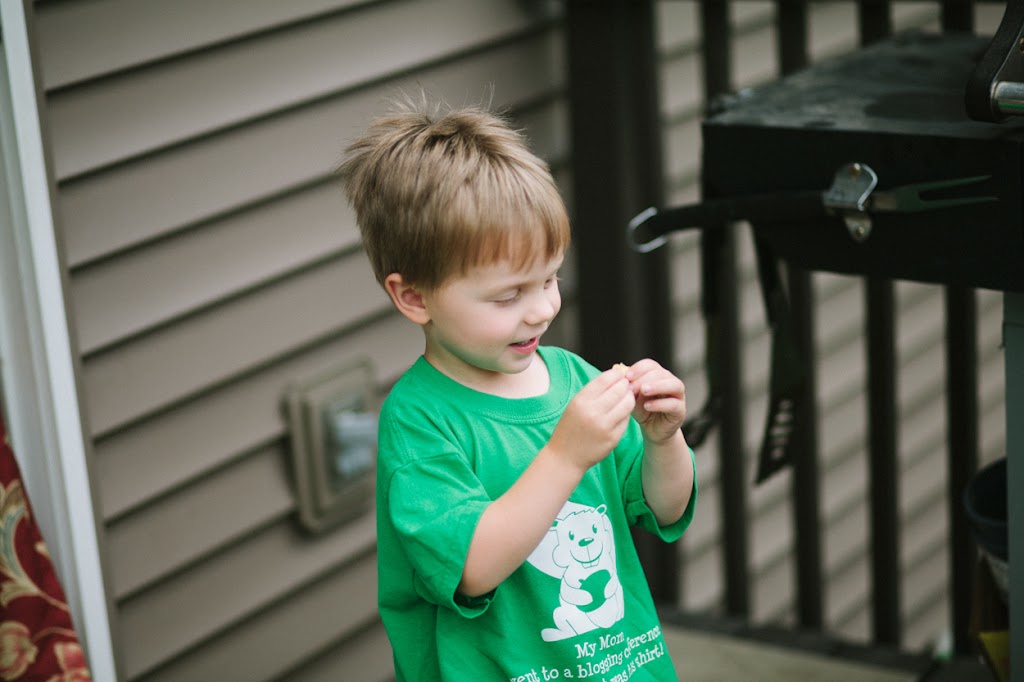 That’s what I’ll immediately tell myself as I wander into a kitchen that has stuff to finish as I push my floral cup under the red Keurig waiting for the three long minutes for my coffee to brew.

But you know what? I am not behind.

Motherhood is about being willing to embrace imperfection and living a life that isn’t about externals but rather about the giving of one’s heart and time to those we love. And sometimes it means working two jobs so that food is on the table. Sometimes it is staying up late to finish things. Sometimes it is letting go of the to-do list and resting in bed with a preschooler in your arms. Sometimes it is running in the backyard in the sprinkler. Folding laundry and stacking it in drawers. Cooking dinner and spreading peanut butter on bread. Wiping tears from eyes. Driving to soccer and ballet and to the store and to birthday parties.

It’s those simple, everyday moments that layer upon each other creating the beautiful motherhood story.

So instead of thinking you are behind or not measuring up or making excuses for your hair being in a ponytail as you quick run to the grocery store for milk and bread – hold your head high. It’s that real part of you. The part under the layers. The real, raw beautiful part that so often gets lost in the busy that isn’t imperfect but is truly perfect.

This morning, as I sat in the living room of mine sipping that coffee that finally brewed and the sun danced around me, Samuel came wandering down to me. He put his head on my knee and rested there for a bit. And then, then he looked at me and said sweet perspective jolting words.

Thanks for cuddling me, momma. 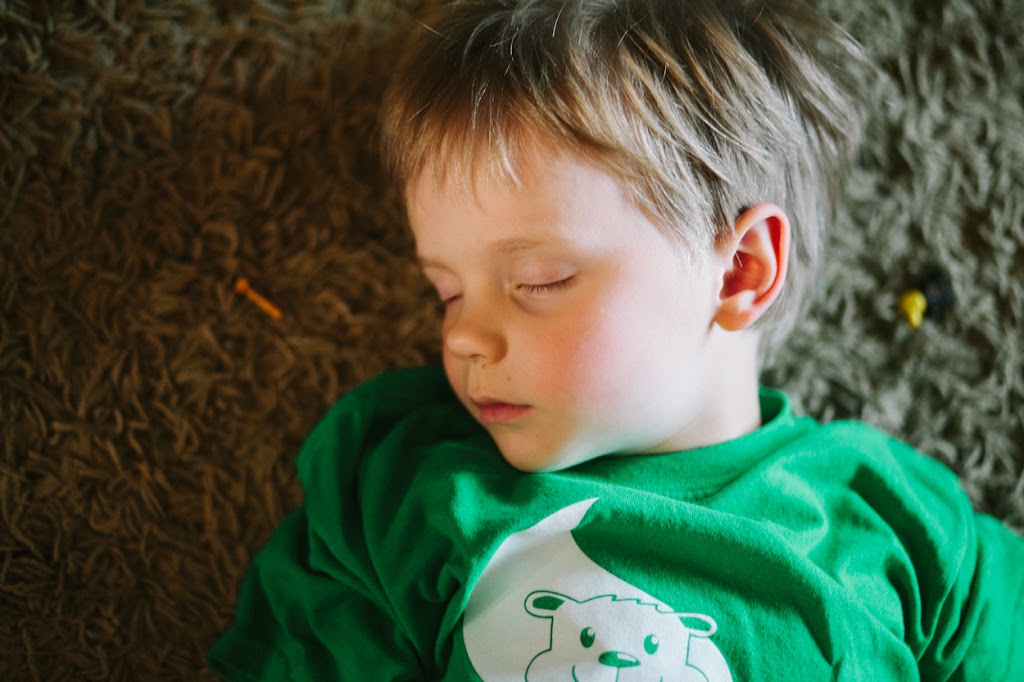 He saw what was important.

I love you, Samuel.

Today, today embrace the importants in your life. Don’t qualify you. Or your motherhood journey. Hold that head high. This is the real onward brave mother stuff.

It’s not stuff. It’s the giving of the heart.

Being real. Being brave. One day, one moment after another.

n and may not be used, copied or transmitted without prior written consent.

Bless you @kiwimummi today. I think I write so that I too can remind myself to bring myself back to my kids level.

May your day be amazing.

I love how you weave momentary beauty into poetry. Thanks for this.

When I look back on my motherhood journey someday, I won’t care one whit about how many tasks I crossed off. I’ll be shedding tears at how many times I got to be my son’s mommy in the moments he needed me most.

Rachel, your writing is beautiful fuel to a weary soul. I had the same thing happen to me last night, but it was my big girl. She couldn’t sleep. I knew I had hours of edits to do on my manuscript, but I listened to those divine whispers urging me to just let it go for a few minutes …. because that is all she really needed–to re-tuck her in, rub her back, say, “I love you” … and I needed that break, honestly. Thank you for affirming my choices. You are an inspiration.

For his sake I hope he didn’t really have a nightmare! Hate thinking of that poor little man going through that!
Continuing to lift up prayers!
2 Corinthians 1:3-5 Blessed be God, even the Father of our Lord Jesus Christ, the Father of mercies, and the God of all comfort; Who comforteth us in all our tribulation, that we may be able to comfort them which are in any trouble, by the comfort wherewith we ourselves are comforted of God. For as the sufferings of Christ abound in us, so our consolation also aboundeth by Christ.
My email address

Thank you so much for sharing such a wonderful story. This is definitely one of my best moments. It is just very heartwarming and you can feel a child’s love at its best. It just leaves you in awe. This is just amazing.

Continuing to lift up prayers!
2 Corinthians 12:9-10 And he said unto me, My grace is sufficient for thee: for my strength is made perfect in weakness. Most gladly therefore will I rather glory in my infirmities, that the power of Christ may rest upon me. Therefore I take pleasure in infirmities, in reproaches, in necessities, in persecutions, in distresses for Christ’s sake: for when I am weak, then am I strong.
My email address

The Lord is gracious to give us eyewitness testimony! Praying!
1 John 1:1-4 That which was from the beginning, which we have heard, which we have seen with our eyes, which we have looked upon, and our hands have handled, of the Word of life; (For the life was manifested, and we have seen it, and bear witness, and shew unto you that eternal life, which was with the Father, and was manifested unto us;) That which we have seen and heard declare we unto you, that ye also may have fellowship with us: and truly our fellowship is with the Father, and with his Son Jesus Christ. And these things write we unto you, that your joy may be full.
My email address

Beautiful as always… This one got me good this morning and the tears are still flowing from a happy heart. Bless that little angel.

I love this so much, thank you for posting 🙂 I re posted this on my fb page a few weeks back and have just come back once again for a welcome, and humbling reminder x