Latest Trends
dear sweet mom who feels like she is...
just do the dishes. please. the kids will...
to my kids – the raw truth of...
a mom that shows up
to the mom who lost her heart
i forgot how to be the happy mom
what single moms need friends to know during...
to the mom who keeps going
2020 Mindset Goals
the lesson of the fallen Christmas tree
Home motherhood and yes, I said, “you make things complicated.”
motherhood

and yes, I said, “you make things complicated.”

Not my finest moment in parenting. Not at all.

Wednesday was shaping up to be one of those busy days. Nothing terrible, no crisis at hand, house fairly clean and such. It was just one of those inevitable mom type days where my name was uttered every 2.7 seconds without much pause inbetween. And every “mom” cry was an “urgent” situation.

Where’s the mustard? I spilled my milk. I “accidentally” dumped dirt all over the grass. Samuel dumped out all the bubbles that you just bought! Can I go to the park? Where are the plastic bags? Could we play with water outside? What’s for lunch? I can’t find my shoes.

On and and on. 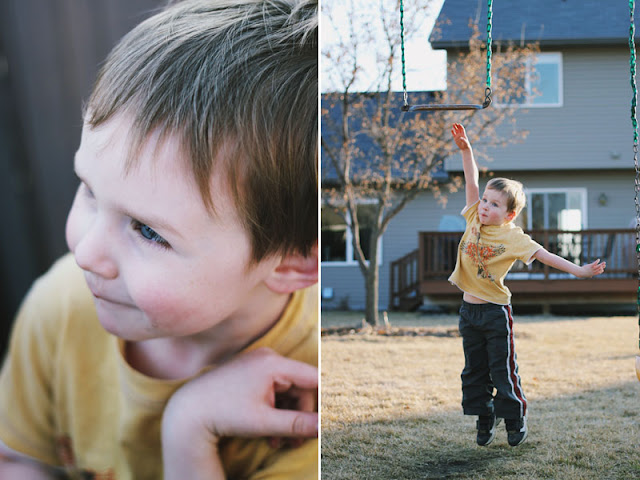 Till the point when he, make that Elijah, the precocious four year old pictured jumping above, the same one who had tried to escape our yard three times, dumped out his blocks, spilled his milk, threw a fit because he didn’t get enough chips, and was now irritated about his pants that I chose for him to wear because his previous pants had gotten very muddy again — at that point I, the weary mom blurted out, Elijah, you are making things so complicated.

He looked at me in surprise. There I was surrounded by a sea of assorted wood blocks and legos and holding a new pair of pants and a four year staring at me because I just told him he made stuff complicated.

I felt awful. Did I really think motherhood would be anything but complicated? 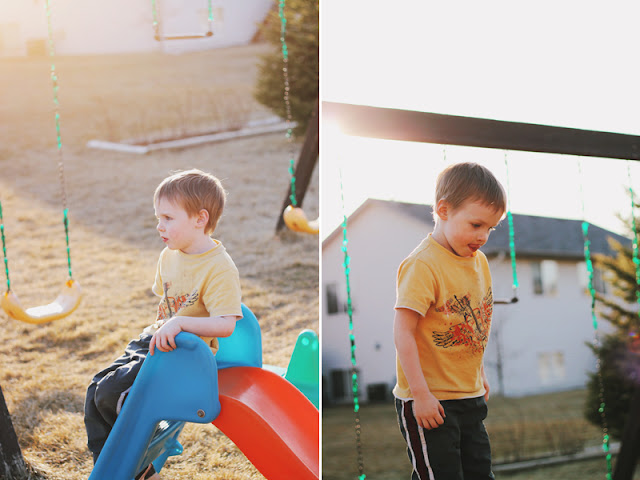 When, on that very sunny and warm March day, did I think that motherhood would run like a page out of a magazine? With children with stain free and trendy clothes? And perfect meals served right on time? Where the four year old wants to stay in the yard?  Because, for that moment, I did. And I became disgruntled and a bit overwhelmed with my spitfire of a four year old’s behavior.

Yes, he needs to learn boundaries. Yes, he needs to ask before he pours milk. Yes, he must play with blocks {and who, seriously, can play with them all dumped in a box?}. Yes, he needs to not want to change his pants 7 times a day because he “just” got in the mud again. But, more than that, he needs a mom who is willing to embrace him right where he is now. 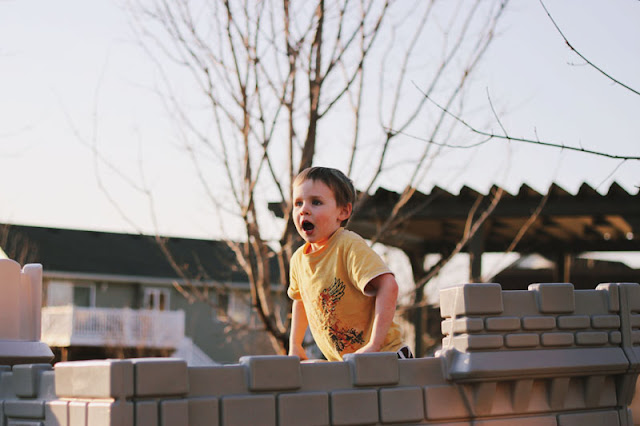 And that mother, simply must not define him as complicated. He’s not complicated. Motherhood is — and that, no matter how I try to fight, is to be expected. The more I realize that my days will be busy, exhausting, tiring, and still joyful then the less I will feel frustrated because I’m running after that 4 year old in the backyard who just wants to try out the neighbor’s swingset.

Bottom line: that four year old of mine for all of his busy, exploring, not-listening perfectly, and wild behavior has a tender, loving, caring heart. I know. Just yesterday, as I was taking a short little cat-nap on the couch {I hadn’t quite fallen asleep}, that same Elijah went downstairs, grabbed an afghan, came upstairs, put it over me, tucked it up, gave me a kiss, and said, “I love you, mom.” 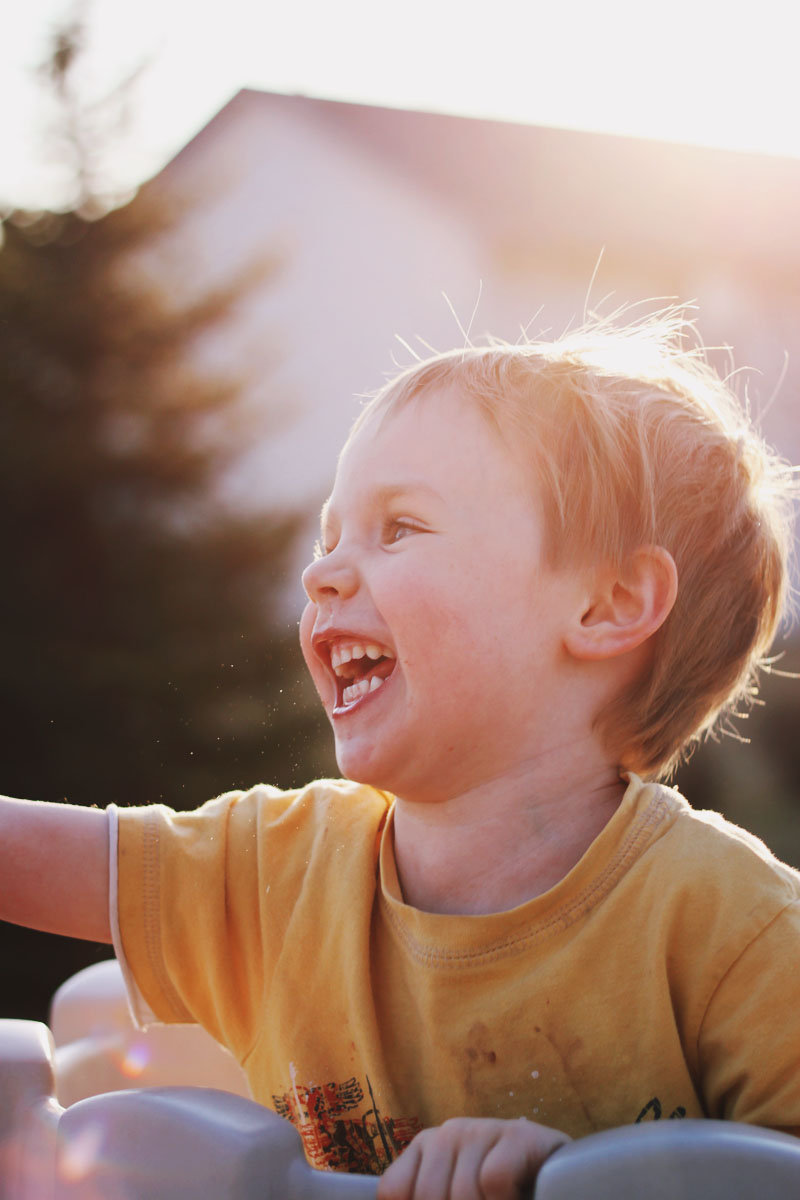 He is not complicated. He is my son. And I love him just the amazing busy way he is right now.

so true. so very true. the last pic is priceless.

at the moment, I’m still dreaming of becoming a mother, but this post really encouraged me because it applies to so much else in life! thank you so much. xo.

I’m sure we have all been there.

Thanks so much for this post! I’m guilty of letting the “complicated” job of motherhood cause me to be frustrated and impatient far too often. I appreciate this reminder to enjoy our kids as they are right now.

Oh sweet thing … see, you are so very, very sweet.
In the last week, I may have mentioned that my nine yr old will gaduate at forty, will need to find a wealthy man to take care of her needs and that she is a complete p.i.t.a.
and I was not calling her bread.
I heart you.
And that is all.
xxxx

ugh. I’ve been there, more times than I can count lately….saying the words that come to my mind while the guard over my mouth is asleep on the job…

I’m thankful for grace EACH and EVERY day….and for your encouraging words.

If this is one of your ‘failing’ moments then I’d say you are doing way better than me. I applaud you, you are something, great mom!

What a beautiful and inspiring blog you have, Rachel. So glad to have stumbled across it this morning! I am filled with admiration for your honest spirit and the beautiful photos. Although I am now an empty nester, I remember those days that seemed to try to my patience as a SAHM and I applaud your frank discussion on the difficulties and joys in that walk. Looking forward to participating in your Friday Favorite Things link up….such a positive way to end a week! Blessings to you!

So beautiful Rachel. You cause me to stop and ponder this morning.

What a sweetheart! I love how he takes care of you!

so true…we all have had those moments that make us cringe when we remember them. I know I do…but so glad you were able to come out the other side recognizing the truth. The last picture is amazing…what a cutie!

so beautifully written. i needed to hear this today. love these pictures of this sweet boy!

I noticed your comment on Kimberly’s blog about gluten-free Girlscout cookies and had to pop over. My daughter was diagnosed last Summer and we are still figuring it all out. I’m going to go back and browse around your blog some more. So glad to find a great resource for Celiacs.
xoxo,
Kim

thank you so much for your honesty — & your reminder of truth.

i have been struggling lately w/ my expectations {as a mom} causing me to miss the treasure of the moment (& translating into words or non-verbals just like yours). i don’t know why it’s so painful for me to let go of expectations when i know full-well that Freedom & Joy await me on the other side . . .

I don’t know…I don’t think complicated is a bad thing. Psalm 139 says we’re fearfully and wonderfully made which sounds complicated to me. I think all kids are complicated but that’s what makes them unique! And precocious…and adorable…and…kids!
Our hope is in the Lord! Praying!
Romans 15:4, 13 For whatsoever things were written aforetime were written for our learning, that we through patience and comfort of the scriptures might have hope. (13) Now the God of hope fill you with all joy and peace in believing, that ye may abound in hope, through the power of the Holy Ghost.
My email address

Been there. Been there. Sometimes the frustration just spills over before you know it. It’s hard to stop and take a deep breathe sometimes. I think the repetitive calling my name every 2 seconds is one of my biggest motherhood challenges. Sometimes they don’t even say anything when I answer and I think surely they’re doing it just to irritate me! But I know better. I just need that deep breathe and then I can handle it 🙂

I’ll never forget the day that I repeated my mother’s words! My oldest was riding in the back seat of the car and seemingly every other word was “Mommy!” All of a sudden, my mom belted out “I changed my name to a$%hole so you can’t call me any more!”

Wait a minute…that was me.