Latest Trends
dear sweet mom who feels like she is...
just do the dishes. please. the kids will...
to my kids – the raw truth of...
a mom that shows up
to the mom who lost her heart
i forgot how to be the happy mom
what single moms need friends to know during...
to the mom who keeps going
2020 Mindset Goals
the lesson of the fallen Christmas tree
Home intentional living seeing the beauty found in the in between
intentional livingmotherhood

seeing the beauty found in the in between 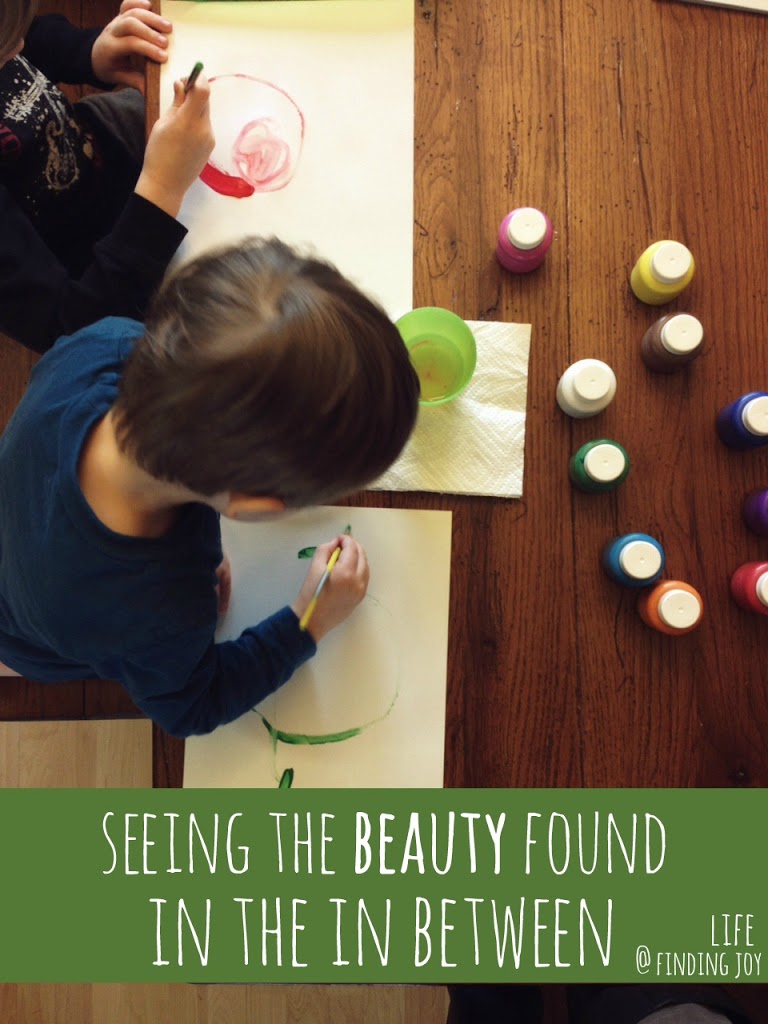 In a world of completed projects, and do it yourselfs, and pinterest pins, sometimes there feels to be little space for the in between times in life. Space for the not quite so perfect, the tries, the flops, and the normal days. For the project that certainly doesn’t look like it belongs on a pinterest board, that doesn’t need to be photographed, and for the glorious mess of creativity that is often left behind.

The in between times don’t get that grandiose look at me celebration that the ends do.

Though they should. Somehow the path to end has been blurred by finished pictures of the end. We’re shown a constant barrage of endings all the time. Finished rooms, crafts, cookies, ball jar projects, clean vehicles, health secrets, gardens, kids clothes, school projects, Mother’s Day crafts, and more. We plan our lives with a list of finishes – when we get done with this we’ll do that, when this changes then I can do this, if only I can get this room the way I like it, this project, that job, it’s all goals. Goals are good. Yes, goals and ends are good. Do not NOT have goals. I believe in them. In fact, I’m so goal orientated that I tend to lose sight of the everyday. Which is one of the reasons I write about the little things, about the journey. The end goals are beautiful.

But so is the in between.

I remember when I was little and would get these Lego sets. I’d rip open the box and I’d start to build. Piece after piece after piece after piece. There was this excitement, this work, this building, and anticipation of the end creation. And then, then the finished project would be there. Done. And part of me was just a bit sad.

I loved the building part. The creative. The steps. The working to see it completed.

Sometimes we miss that in a culture that celebrates the ends in life.

Get the trophy. Graduate. Get married. Have children. Go to Disney. Get the good job. Get good grades. Have a great yard (well, that seems to be the thing in my neighborhood). Finish this. All good things. Ends.

But there is also tremendous beauty to be celebrated in the moments in between the ends. Now I’m not talking about making every moment a faux image of perfection like we were waltzing down the street in Disney World. I’m instead talking about looking and celebrating our end goals but also looking at the in between moments with the same fervor. What if we celebrated the path? The steps? The process of movement? The times where we have to will ourselves to stand up again and keep trying? The times where it looks bleak and yet we hold onto the littlest strand of faith? The times when it just seems like failing and yet it really wasn’t because we were trying? The mornings when everything is crazy and yet we sit on the couch and read a story? Or the times where the door is shut and we have to muster the courage to find a new door? 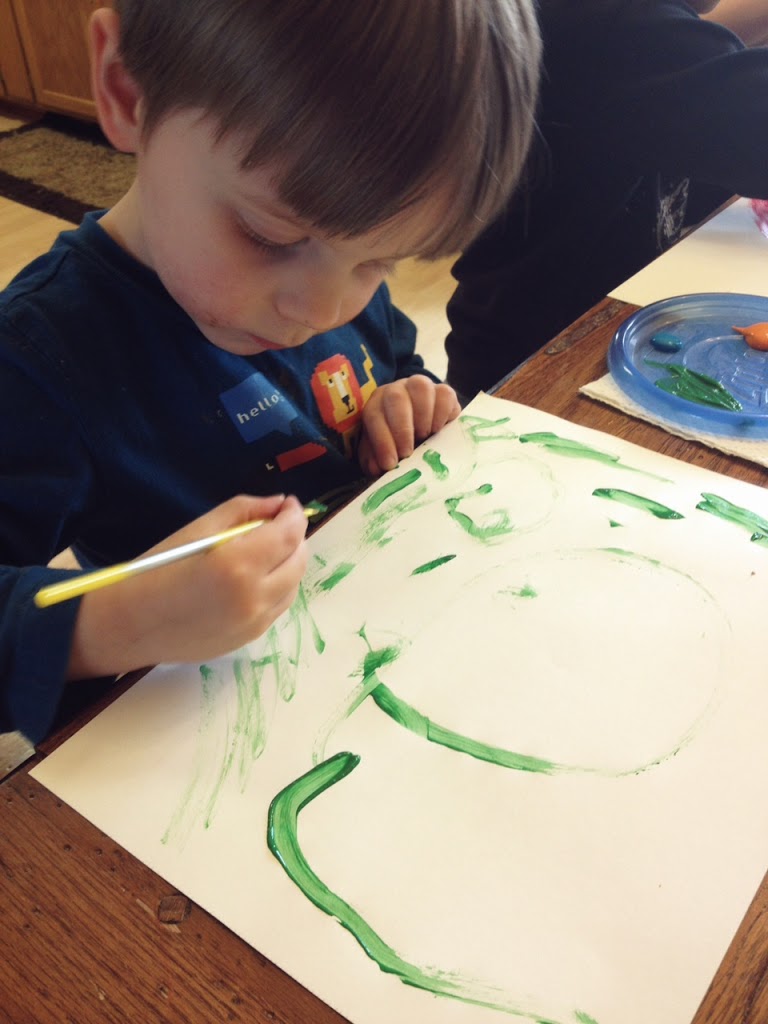 Think of the beauty found in the in between.

In the times when we tried and tried and tried and even though it never worked how we imagined yet it still worked. It’s in the kid’s projects that don’t look anything like the project on the screen and yet our kids are happy. It’s in paint all over the table and paintings that don’t look like much, but are masterpieces in the littles eyes. Pinnable? Maybe not. But, it’s perfect. It’s perfect because it teaches us, it teaches our children, about life. It’s about perseverance, trying, not giving up, cultivating vision, and being creative.

The process, the working, the side by side struggles, often matters more than the end image.

Motherhood happens on the in between.

Life is in the in between moments. The ends are the marks, but life, the story, is in between.

Remember that almost every end that you see took flops, steps, and perseverance. Attempts after attempts after attempts. I remind my children often about Edison and the lightbulb and all of the times he tried it. Or Samuel Morse up in the laboratory that also served as his home developing the telegraph. Trying, trying, trying. Over and over. And I tell them to imagine if they had stopped just one time before the end was there?

It’s that trying, that in between places in life where character is born, tenacity is sharpened, and where the beauty of life and relationships happen. It’s the start of courage and the beginning of strength.

It’s the little things, the moments, the learning, and the teeny joy moments of life. 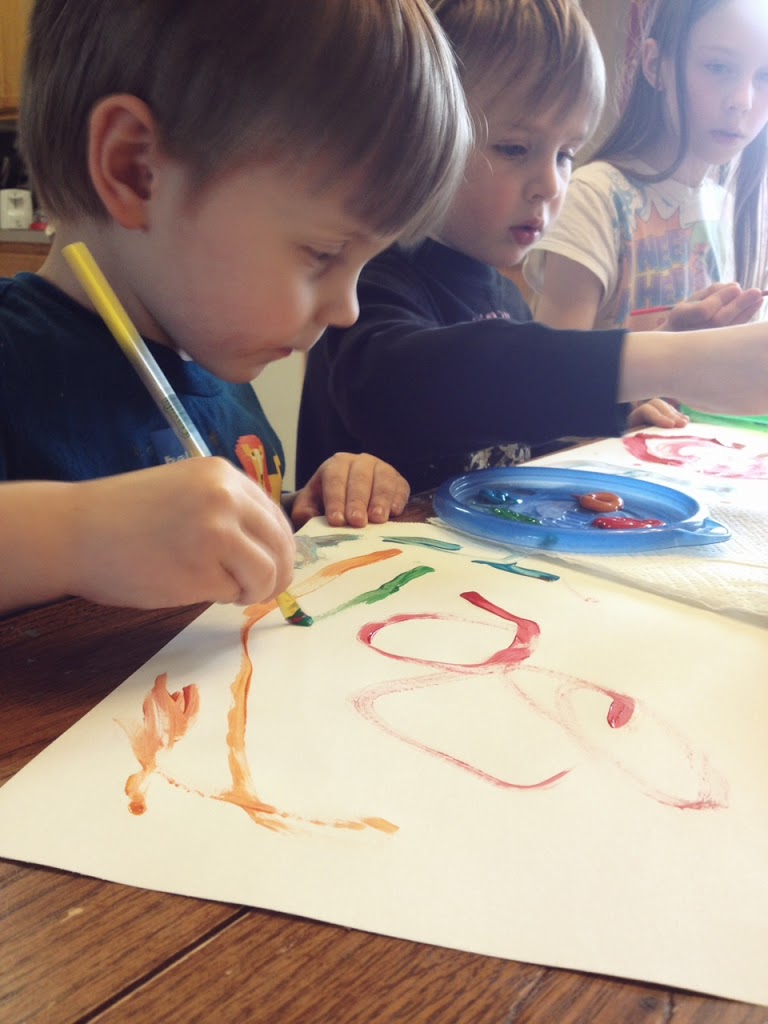 There is always the in between.

It’s that normal, that beautiful ordinary normal motherhood day, that the in between embodies.

And the beauty of life is most often found there – in the in between.

Images and original content are sole property of Rachel Martin and may not be used, copied or transmitted without prior written consent.
0
FacebookTwitterPinterestRedditEmail

If you want to change the frenzy, change...

ten things this decade taught me

don’t let others steal your joy

This is so true:)! Thank you so much. I just looked on Pinterest for the first time ever today and I think I can get a lot of inspiration from there on the right day…but today I just got overwhelmed by all the projects and pretty stuff and organized homes:(

with one sick kid( out of four) and not much sleep last night, I’m happy that I’ve had some good talks with my teenagers today( not planned ones, but in between dinner and dishes we sat for a few minutes together).

I’m also happy that I read a chapter for each of my girls and sang a song for them before they fell asleep.

Absolutely beautiful!! Just found your blog and I am in love already 😉 thank you for sharing your heart!!

Love Samuel’s artwork! Most kids that age go crazy on the paper. He’s very methodically painting special lines, etc…
Praying!
Psalms 63:1-2 O God, thou art my God; early will I seek thee: my soul thirsteth for thee, my flesh longeth for thee in a dry and thirsty land, where no water is; To see thy power and thy glory, so as I have seen thee in the sanctuary.
My email address

Thank you for this post I really needed this today. I even wrote a post about needing this today and shared this post with my readers. Thank you. http://www.choosingjoyblog.com/2013/04/the-space-between.html

If you want to change the...