Latest Trends
dear sweet mom who feels like she is...
just do the dishes. please. the kids will...
to my kids – the raw truth of...
a mom that shows up
to the mom who lost her heart
i forgot how to be the happy mom
what single moms need friends to know during...
to the mom who keeps going
2020 Mindset Goals
the lesson of the fallen Christmas tree
Home Samuel the day
Samuel

For the last several nights we’ve had children wake up every hour.  Seriously.

There seems to be some kind of sickness going around — it lasts about 36 hours and consists of a fever.  Nothing else, that I know of, at least yet.  I know nothing because the two that have started this trend are little — Elijah and Samuel — and they are not great at telling me what’s wrong.

Until today, when Mr. Caleb, my five year old, woke up with a fever.  He told me that his head hurts. 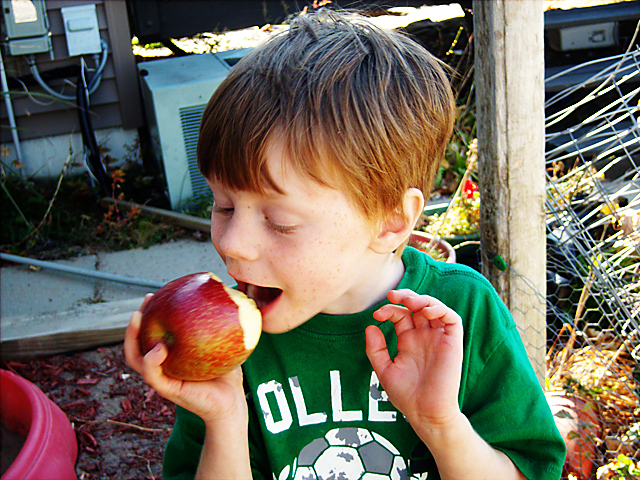 That’s my Caleb enjoying an apple on Friday

So here are my miscellanies for this monday.

1) There is such a shift in parenting when you move to pick a child up in the middle of the night when you touch them and they’re feverish.  Any frustration with being woken up is immediately replaced, and any tiredness erased.

2) Samuel has croup.  Again.  Every time he gets a little cold it immediately effects his breathing.  This is due to the star that was stuck back in June (for those of you who are newer to finding joy you can read about that journey here — starstuck ). I hate seeing him struggle.  I’ve learned the importance of keeping him calm, without crying, when he’s sick — too much crying swells that throat. 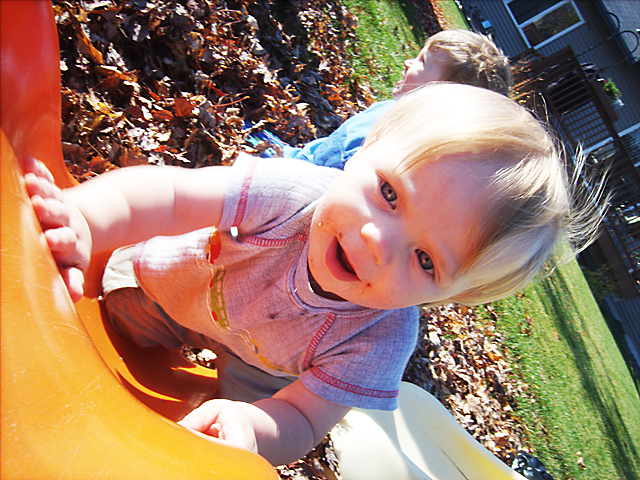 And Samuel on Friday

3) I don’t like them sick. I hate it.  In fact, I’m using the word hate even though it’s not allowed in our house, to describe seeing those little ones not feeling well.

4) I do love the increase in cuddles. Samuel is sleeping on me while I type.  With one hand.  Please excuse any typos….

6) We own probably 9 thermometers. Right now, I couldn’t tell you the location of one.  Probably in the couch, or the junk drawer, or the ledge in the family room, or my purse.  Not in the first-aide drawer in the bathroom — where they’re supposed to be.

7) I am drinking coffee right now.  The level of tired that I have is through the charts. I think I might just get a Caribou. 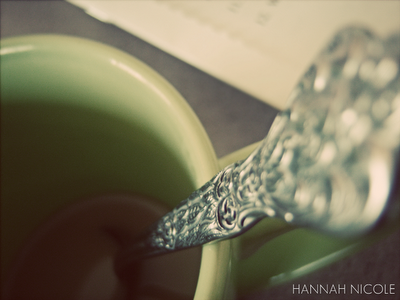 9) Did you read number 9 carefully?  It had nothing to do with sickness — for which you are probably incredibly grateful since who really wants to read about a mom whining about illness? —  it has to do with my little baby walking. Make that toddler. Go, Samuel, go!

10) I’m going to end before 10.  Which is hard for me, since I like order and routine.  But, I’ve got little Caleb coming upstairs, after attempting to watch a television show (in the morning which is never allowed), and telling me he doesn’t feel good. And this tells me he really doesn’t feel well — no free tv in the morning because it’s too loud?  It’s time to do some mothering for both Caleb and Samuel.  Thank goodness Elijah feels better today…… aw, never mind, I just made this number 10. 🙂

….and from my daughter Hannah’s post on her blog aspire, I know she’s feeling fine as well.

That leaves two.  Wake up Chloe and Gracie — your momma wants to see you!

And I would love your prayers for health today.

Carissa, bless you for making this miscellany.  Bless you!

Take care of yourself so you don’t get it. When you get too run down you stand a chance of getting sick.

I took care of my four sick girl and got myself so exhausted that I ended up getting sick-really sick!

I hope there are lots of naps today!

I’ll be praying for your little ones to feel better and that God will protect your household from further sickness. Get some rest and go get that Caribou!

I hear you about no vomit…I have a fear of vomit…HUGE fear. I hope your little ones get better soon. And yes, GO Samuel.

ohhh :[ being sick is never fun – and it must be worse when you’re a mom watching your kids be sick. i hope they get better soon!

that’s awesome that samuel is walking!

Definitely praying for you and your family, Rachel girl. Hope everyone makes a quick recovery!

And yes, my vote is definitely get a Caribou.

I would be happy to pray that your household soon becomes healthy and germ free.

I will pray for you and your family. I know how difficult it can be to stay wake, though. I am on my 6th coffee right now because I was no able to sleep last night – too many things on my mind.

We keep loosing thermometers, as well. May it’s because you generally do not need them and when you do, you have too much on your mind to put them back into the first-aide drawer. I once found one in a living room closet. No idea how it got there.

I hope everyone in your family will feel better soon – including some extra sleep for the wonderful mom.

I’ll pray for those babies of your today! So glad I ran across your blog thanks to Miscellany Monday!

I SO understand the dilemma with going to church and coming home with sick kids from the nursery 🙁 It’s pretty darn frustrating!!!

Congrats on the walking lil man!

oh too much sickness!!! so sorry rachel! i wholeheartedly agree w/ #1. ugh croup is just awful… hunter had it last month which included an ER visit and it is scary. although the croup is stinky, i’m super excited about samuel walking! what a fun (and busy) milestone. : ) praying for wellness and the germs to stay put and not spread. and #5 – although we’re only a fam of four, i’m instituting your rule pronto!!!

and i hope you got a Caribou today. you completely deserve it!

…and somehow I had not yet read the story of the star. What a blessing healthy truly is.

Praying for your sweet kiddos (and you!). Croup is awful – my twins have had it every. stinkin. year. For 3 years. The nebulizer and I are good buddies.

I will take vomit over boogers. Boogers are the worst things on the planet!

Congrats on little Samuel walking! What a sweet stage!

Always hated sickness going through the kids…oh it’s hard! Especially when they can’t tell you what’s going on!
Know that you’re in my thoughts and prayers!
Isaiah 43:1-3a But now thus saith the LORD that created thee, O Jacob, and he that formed thee, O Israel, Fear not: for I have redeemed thee, I have called thee by thy name; thou art mine. When thou passest through the waters, I will be with thee; and through the rivers, they shall not overflow thee: when thou walkest through the fire, thou shalt not be burned; neither shall the flame kindle upon thee. For I am the LORD thy God, the Holy One of Israel…
Prayer Bears
My email address

We are going through a similar sickness — up frequently, fever, but, contrary to yours, with VOMITING. Yes, now multiple that by 7 and I know you, Rachel, know how much fun that is. 🙂

Ditto though on number 4 – I LOVE those extra cuddles.

Christ Himself gives us these promises. Know that I’m here praying!
Revelation 21:5-7 And he that sat upon the throne said, Behold, I make all things new. And he said unto me, Write: for these words are true and faithful. And he said unto me, It is done. I am Alpha and Omega, the beginning and the end. I will give unto him that is athirst of the fountain of the water of life freely. He that overcometh shall inherit all things; and I will be his God, and he shall be my son.
Prayer Bears
My email address