Latest Trends
dear sweet mom who feels like she is...
just do the dishes. please. the kids will...
to my kids – the raw truth of...
a mom that shows up
to the mom who lost her heart
i forgot how to be the happy mom
what single moms need friends to know during...
to the mom who keeps going
2020 Mindset Goals
the lesson of the fallen Christmas tree
Home Family appreciating the old
Family

Several days ago, I looked around my house and started to get irritated.  The couch from when we got married is still in our living room.  There’s an old wing chair — it was my grandparents.  Permanent black marker scratches are on my dining room table. There are shoes all over the entry way.  And dishes waiting to be washed in the sink. There are walls to be painted, and a floor that just needs to be swept.

That worn couch that I so want to replace – has memories.  Laughter and tears. Each worn thread not only shows signs of wear, but of family.  Of hours spent reading to my kids.  Or hours snuggling little babies to sleep.  It shows victory – there was a time when Todd was too sick from radiation treatment that he couldn’t get off the couch – and now he comes and goes as he pleases.  There’s contentment and rest — good and bad — life found there resting on those worn cushions. 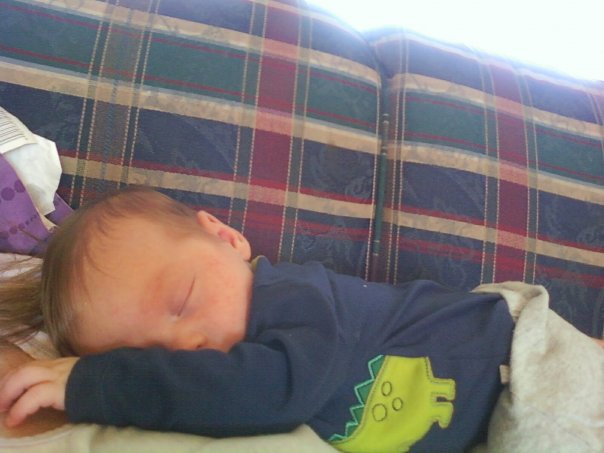 newborn Sam sleeping on me

Oh – funny couch.  Held up with weights.   Just those weights are a memory.  Of moving and living in San Diego (they broke off in this move).  Of improvising.  Of still working on things even though they are broken.  There’s the pillow where the seam broke where I attempted to stitch it together.  Then the memories of finding the stuffing in the boys room — it was their “best” day ever.  At least that’s what they told me. 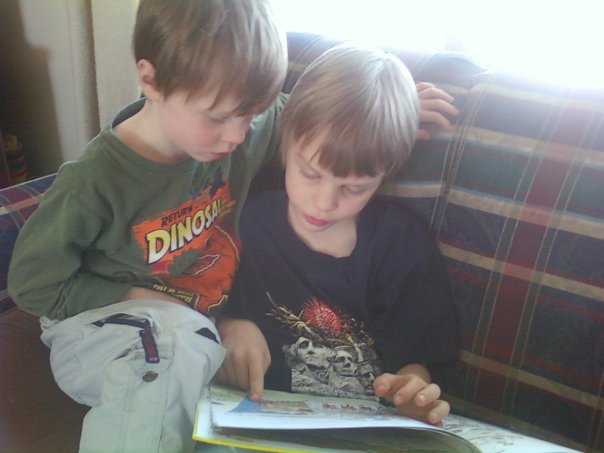 Someday, I’ll replace that couch.  It will probably be soon — I’m ready to upgrade.  But, honestly, you know I’ll miss it.  Not only because I was okay with plopping myself on it and cuddling a little guy who just ran around outside, but because that couch,  that couch holds memories.  And those things have to be earned – one broken leg, ripped seam, spilled coffee, thrown pillow and squished seat at a time. 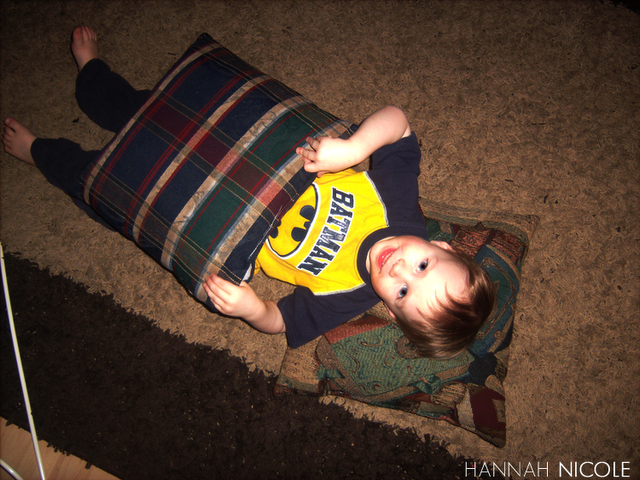 Elijah being made into a pillow sandwich

It’s easy to look at everything and see what we don’t like — sometimes there is much more work in seeing the benefits.  How about you?  What do you need to look at with fresh eyes?
0
FacebookTwitterPinterestRedditEmail

Just beautiful – I was thinking of this very thing today, and it led me to be thankful for and content with what I have. I don’t have a designer home, but I have a home that is lived in, full of laughter, past memories, and memories still to be made.

Now that’s a sweet sweet post! You’re right some things have such tremendous memories associated with them…but in the rush of everyday, sometimes we forget and need to be reminded!

I have been recently thinking the same thing…looking around my house realizing that most of the stuff in it was given to us, or it’s from Target or Ikea.
But we’ve made it look really nice and I am so thankful we have what we have. And we may never go to a real furniture store and buy real furniture…but it’s ok!
And the breast milk and puke stains on my couch and sofa…well, I’ll always remember those times 🙂

After my parents divorce we had a couch that sat on three large Campbell soup cans. Every once in awhile someone would plop down too hard and we would have soup for dinner! Memories 🙂 I can’t eat canned soup without thinking of those days. 🙂

Oh, such a sweet post. I can relate so well. The bedroom suit in our master bedroom was one my parents bought for me when I was probably about 12 or 13….and they bought it used! But, oh the memories!

By the way, I love your new header

This is so inspiring to me! You’re a really inspiring mom!

Great post! I think if we look at each other carefully look beyond the ruff edges we would see people for who they are/

We would see the hurt, pain, the insecurity, and then maybe maybe we could really serve and minister to one another!

Simply beautiful. I was at a house today for a baby shower. This home was so beautifully decorated, everything in it’s place. I felt something rising up in me. I began to feel angry about our financial situation because I cannot afford to decorate or make my home beautiful. It’s so frustrating. But I have to remember that it’s not the material things that make a home beautiful. It’s the laughter of my children, and the connecting with the husband and the times we spend together making memories. Thank you for opening my eyes today.

such good points. you always get me thinking or you know just what i’m thinking. thanks for challenging me. my attitude has been a real piece of work lately b/c i focus too much on negatives. when, in reality, there are way more positives! and speaking of memories, what sweet blessings they are! your family is so beautiful to me… i want to raise our children like you do. i love hearing about your sweet memories and looking at your lil’ beauties!

p.s. – thank you for your thoughtful comment! hope you have a wonderful Lord’s day as well!

such a sweet post Rachel… i too get very attached to old things… because of the fond memories it brings back when i look at them. they are so hard to part with at times..:)

New isn’t always better…nothing can replace memories!
Praying right now.
Psalms 9:9-10 The LORD also will be a refuge for the oppressed, a refuge in times of trouble. And they that know thy name will put their trust in thee: for thou, LORD, hast not forsaken them that seek thee.
Prayer Bears
My email address

I love memories like that.. Have a great Halloween.. Thanks for stopping by…

Awwww….what a sweet tribute to your sofa. So hard to get rid of something with so many memories!

Love your fresh eyes and grateful heart. What a reminder to look below the surface at what really matters and what holds weight, purpose and value.

Beautiful words to remind us of what’s really important….and it isn’t the marks, scratches, tears, etc.! This is real life….homes full of His love and laughter and blessings.

Great encouragement, and it’s so nice to “meet” you!

Know that I’m always here praying!
Psalms 46:1-3 God is our refuge and strength, a very present help in trouble. Therefore will not we fear, though the earth be removed, and though the mountains be carried into the midst of the sea; Though the waters thereof roar and be troubled, though the mountains shake with the swelling thereof. Selah.
Prayer Bears
My email address