Latest Trends
dear sweet mom who feels like she is...
just do the dishes. please. the kids will...
to my kids – the raw truth of...
a mom that shows up
to the mom who lost her heart
i forgot how to be the happy mom
what single moms need friends to know during...
to the mom who keeps going
2020 Mindset Goals
the lesson of the fallen Christmas tree
Home Wordless wednesday a little bit about the weekend in 8 notes
Wordless wednesday

a little bit about the weekend in 8 notes

1} Here in Minnesota we never know what clothes to keep in the drawers in October. Do we keep out the flip-flops? To which, by the way, I told a friend of mine on facebook that I keep mine out all year just to spite the weather. You’ll find me in my sandals in -29 degree days in January running {fast} to the mailbox. Or the shorts and jeans? Which to put away? And speaking of putting away — the seasonal clothing exchange swap take a whole day make that a week  — is one of my least favorite things to do. You will not see — the annual clothing exchange — on friday favorites. Ever.

3} I did switch out some of my decor items to some of my more fall type stuff. I’m not really a knick-knack type of gal — too many little kids — so I enjoyed switching the two or three items. Total. 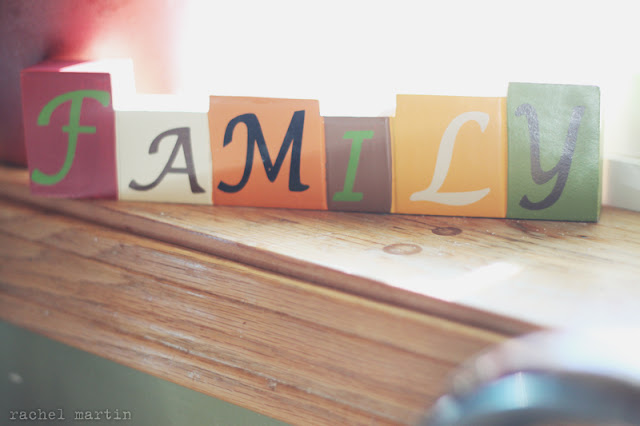 4} Any plant gurus out there? I’ve got this bush {dogwood, I believe} out on my front walk that is looking terrible. It’s totally dying and I’m thinking I’m going to have to pull it up and replant. Such a bummer as it was once a glorious and beautiful bush. What would you plant in it’s place? It’s got to be Minnesota hardy. 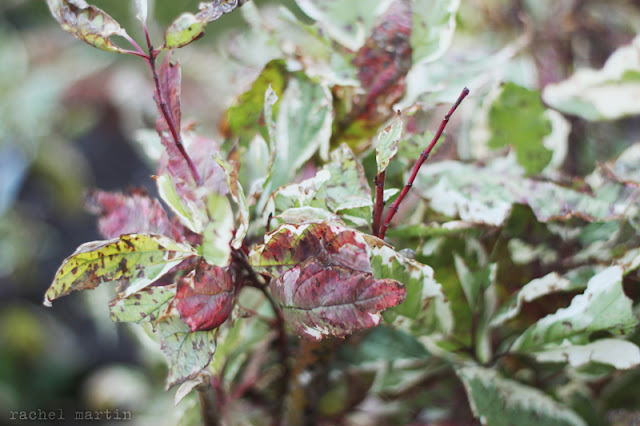 5} We tried to go to church yesterday. While I was driving Brennan had a coughing spell so I realized that I might simply be pushing them to do stuff too soon. However, while driving Elijah quickly told me that we should turn right now, mamma. His reason? The local Dairy Queen was to our right. I see his agenda.

6} See that little maple with the red leaves? I found that maple growing in my garden two years ago. A volunteer, my dad calls it. Well, being the plant lover {and not wanting to spend a ton on new trees} I nurtured it for a year and then last year dug it up and planted it in the corner of my yard. Now, 15 months later it’s grown almost a foot. Some day it will be a glorious tree — wonder how old I’ll be then? 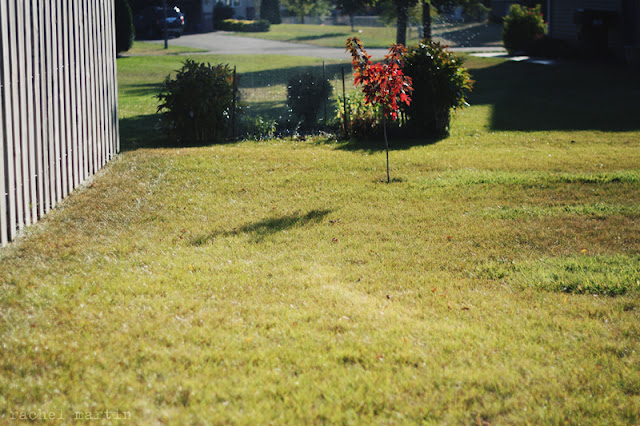 7} Sometimes, I really like a Coke. Here in Minnesota we refer to it as pop. Some of you might call it soda. And other ones of you refer to all sweet carbonated beverages as Coke. Now, let me ask you do you order a Coca-cola Coke? And a Sprite Coke? I said pop in South Carolina and they looked at me rather strangely.

8} Samuel has decided he’s had enough of the paparazzi. When either Hannah or I will pull out the camera he says, no pit-ure, no pit-ure. Then he’ll smile – and then run away. 🙂

I’m linking up with Carissa today. Trying to do something new, you know? I know, not really. I think I’ve only missed three since she started her most fabulous monday meme. How about you? Plans for your Monday?

a glimpse into the ordinary. letters for friday.

stopping to see the favorite things

the beauty of gratitude.

What a fun weekend 🙂 Sadly, I can’t help you on the plant front. I’m more a “dig it up and try again and if it doesn’t work oh well” type of girl.

We live in Minnesota too.

We have a hedge of those dogwood growing around our kennel. Based on the age of the house and what we know of the people who built it – the dogwood is probably pushing fifteen.

We are hoping to plant Korean Lilac when we get the dogwood pulled. It is one of the few lilac which can be pruned hard and shaped without any detriment to the plant or without making it look uglier than ugly (unlike your old fashioned syringa)

My dad planted a dying maple in their yard (too close to our house) about 15-20 years ago…wow! It doesn’t seem that long ago. Anyway, it’s now huge and way too close to our house! That maple will grow faster than you think!
And here in New England, we drink SODA (or tonic, if you’re from Boston like my grandma).

Yesterday at the zoo we saw everything from flip flops to high heeled boots. My kids rescued their old yucky crocks from the trash bag.

We call this “half & half” time, putting away at least half of their summer clothes and taking out long sleeves as needed.

I’m with you – it’s a chore I dread but at least the older girls can help now!

Oh, I hope there isn’t someone who refers to every soda as coke. Because not every soda is as good as coke. (I’m addicted, I can’t give it up. I try.)

Elijah sounds like my daughter, she loves ice cream. I can’t drive by an ice cream shop without her asking if we can make one small stop.

Our CA weather is just summer right now. I see all of these fall goodies and I want that so bad. Oh well.
THat maple tree is going to be beautiful and such a legacy at your house.

I can handle hearing it called “soda” but, “coke”? Are they even serious? 😉

Down South (at least where we live), every soda or pop is referred to as a coke! In fact, we’d never say soda or pop. It confuses people who aren’t from around here though. I guess everyone here is just used to saying, “You wanna coke?”. If someone answers affirmatively, the next question is, “What kind?” Come to think of it, it caused us some confusion when we last visited Minnesota:)

I will say, in NJ, that it’s called soda. Now, if you want to drink soda, you just call it Coke (not coke soda, lol) or Root Beer, or Sprite. It’s so cool though, because I thought “pop” was a southern thing and definitely not a Minnesota thing, LOL!!!

And our weather just turned autumnish again…. but I am like you, a pair of flip flops are always out, since I need to run to the mailbox in the snow 😉

I was born here in Iowa, where we call it pop. Then I moved to Wisconsin, where I learned to call it soda {and the water fountain was a bubbler ~ love that one!}

I am coveting your RED maple tree! 😀 So sorry about your dogwood. Our lonely baby maple tree looks about that good here ~ not sure if we planted it too close to the gravel road?

I avoid the Seasonal Clothes Chaos now ~ I help the boys somewhat, but mostly I avoid the scene and let them all do it without me. {I did my years of torture when they were all much younger.} I just give approval/not when the youngest models hand-me-downs she wants to adopt.

Pop…definitley a midwestern thing. You’d get a funny look here too 🙂

Jack will say, “All done camera”, so he can sympathize with Samuel!!

My husband said he wanted a “pop” once when were first going together. Pop to me was an affectionate name for a father. It was rather confusing at first. To answer the Coke question…I only want Coke ever, so we keep asking for it, even though we understand that sometimes it isn’t available and we have to settle for whatever carbonated beverage is there. 🙂

That Samuel…that is so adorable!!! When I order pop I order it by its specific name…so Sprite or Coca Cola (though I never order Coke because I don’t like fountain Coke) or Orange pop. It’s pop here 🙂 I was just wondering last night about putting clothes away, but it’s the same here in Ohio…you just never know. I hope you have a wonderful week!!!

It is all coke in Georgia! Just order “coke” and they know what you want…it’s a Southern intuition-type gift 🙂

I detest the great clothing exchange every season! ah! what a job. yes, it IS pop. 🙂 and I don’t decorate much either. I don’t like a ton of stuff out, we are very simple and little kids seem to make it hard to keep thing intact. lol

um…yeah. i wear my flip flops to the mail box in the winter, too.

and through the snow….it’s kinda awkward! 🙂 I love Minnesota.

It’s in the 70’s-80’s here but everyone around me is really into dressing like it’s fall. I’m a bit more practical and prefer to be most comfortable; I’m still wearing shorts and sandals. I remember living in Northern Cal ( you know, heaven! Hehe!) and we had four distinct seasons. At least this way I can get the most wear out of our summer wardrobes. I can imagine organizing wardrobes for a family of nine being pretty daunting. hope it goes smoothly – drink lots of coffee! ; )

Samuel and Hunter could be “camera fatigue” twins.

Your tree is going to be big and beautiful. And it was free?! Best deal ever!!!

I call soda diet coke only because it’s the only kind I drink if I do. So that’s acceptable, right? : ) My mom’s family calls it pop of course. You and your pop would make me feel right at home!

We have practically zero dairy queens here. : ( Hope Elijah enjoyed some for me.

Have a great week!!! Thank you for being my most faithful miscellany Monday-er ever! Xoxo!

Well…since it’s already over don’t really have any plans for Monday! And Samuel!!!!!!!!!!!! You HAVE to let your family takes pics of you! How will I keep going without pics of you to smile at? PLEASE! ;o)
Am so blessed to be able to pray for your family!
Psalms 31:14-16 But I trusted in thee, O LORD: I said, Thou art my God. My times are in thy hand: deliver me from the hand of mine enemies, and from them that persecute me. Make thy face to shine upon thy servant: save me for thy mercies’ sake.
Prayer Bears
My email address

We say pop in Pennsylvania too. I used to live in NC for a while and we always got weird looks too. Us northerners, a strange lot I guess 🙂

a glimpse into the ordinary. letters...

stopping to see the favorite things