Latest Trends
dear sweet mom who feels like she is...
just do the dishes. please. the kids will...
to my kids – the raw truth of...
a mom that shows up
to the mom who lost her heart
i forgot how to be the happy mom
what single moms need friends to know during...
2020 Mindset Goals
to the mom who keeps going
the lesson of the fallen Christmas tree
Home perspective in the end…it’s just stuff.
perspective

in the end…it’s just stuff.

My van caught on fire today.

Within ten minutes of pulling onto the side of the road after my van died it proceeded to be entirely engulfed in flames. That’s it. The people in the ER all wanted to see the pics. And they all told me how blessed I was to just be there with my burnt foot. You know why? 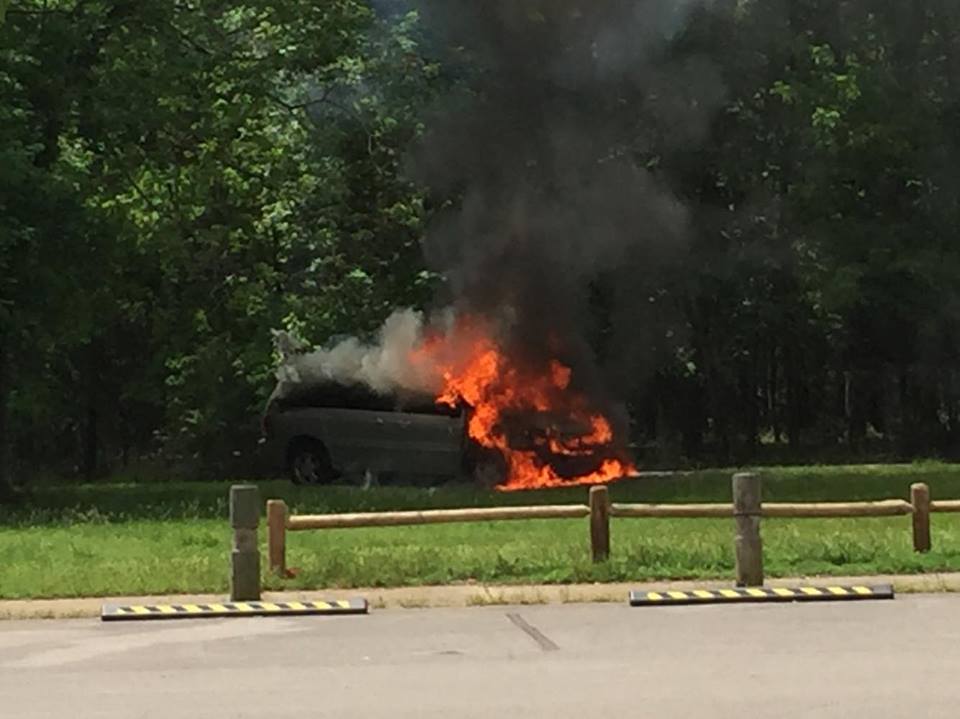 My kids all got out.

A whole bunch of stuff (and van garbage….) was destroyed. Important papers, some mail, some school stuff. My van. Just stuff.

But my kids were safe.

People want to know what happened and what started it.  I don’t really know. It doesn’t matter in the end as it was destroyed within minutes. So know I’m not a mechanic, but obviously, something major happened. We were driving to the park to go for a walk and I missed the turn and I backed up and made the turn and as we driving down that park road all of a sudden every electrical warning light on my van came on and it totally died. I had no control over the steering and no brakes.

Somehow I made it over to the side and parked and tried to gather my thoughts. The engine temperature was normal and yet there was white smoke coming out. I wasn’t sure what to do, but my eleven year old, Caleb, got out of the car and saw fire in the engine.

That’s when I screamed for everyone to get out. That’s also when, in my not so brilliant thinking, I scraped my foot under the burning vehicle in an attempt to snuff out the fire that was burning on the ground. Which, now, due to my second degree burns and melted sock and shoe on my foot, was some type of fluid or gasoline. But my kids were out. And as I watched my van that was the first thing I owned on my own since my divorce, that had gone with me from Minnesota to Tennessee, that had all our stuff in it — go up into flames — I didn’t care.

My family was safe. Everyone at the park (with tons filming probably for facebook live) was safe.

Somehow in this world the stuff gets value.

We work for stuff. We don’t want to lose stuff. But when the stuff gets taken and our family preserved — we quickly realize how much the stuff doesn’t matter. 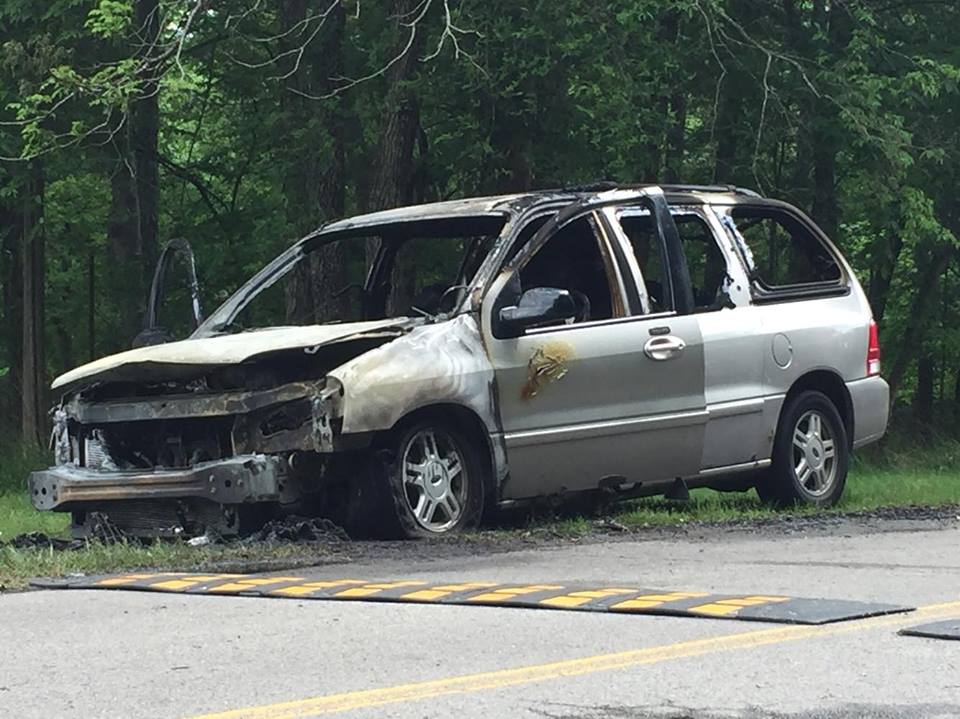 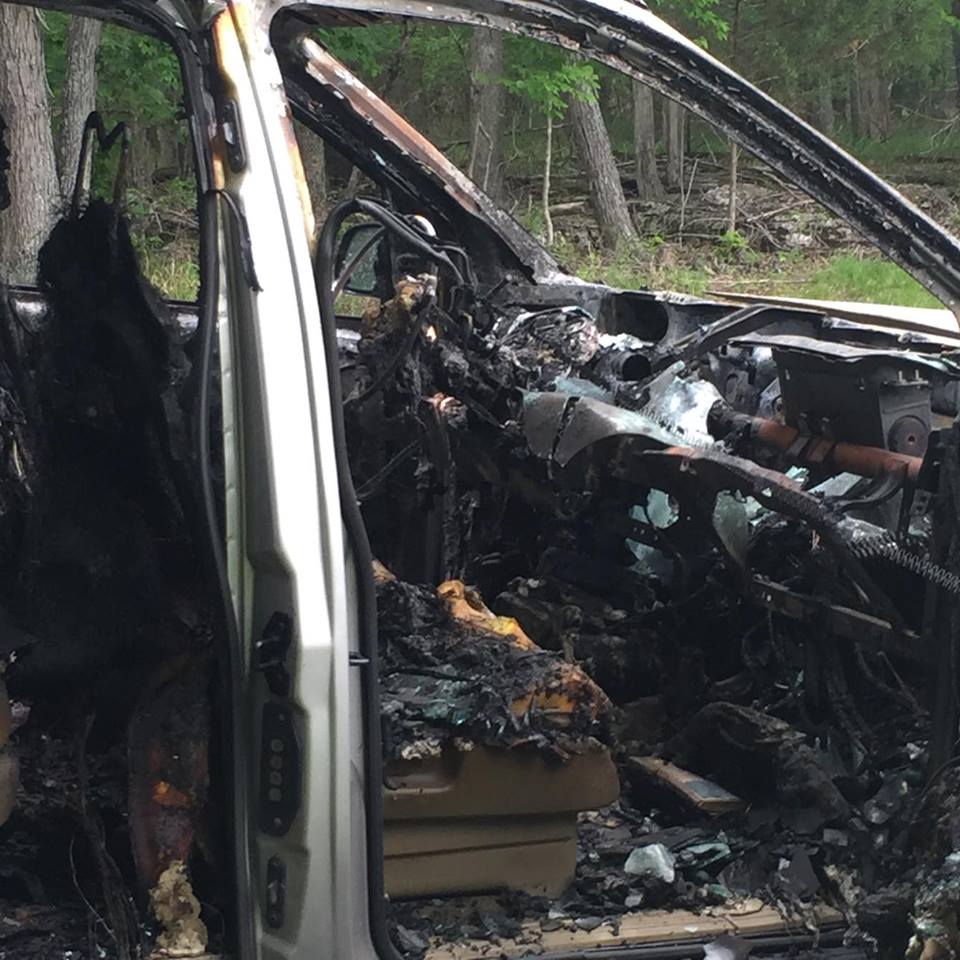 So, now, now I’m so thankful. I’m trying to be thankful instead of sad and worried.

So this is my Finding Joy list for you.

Thankful for the goodness of humanity. So I want to say thank you – to the people that helped me secure one hundred feet perimeter until the firetruck arrived, to the firefighters and park rangers, to my friend Dan and his mother, Mary (who sat with me in the ER for three hours), and father Dave, for the kind grandmother who consoled my two little boys, for the sweet women who knew first aid who helped me with my foot, to the ER staff and for my kids for being brave.

Friends, you never know when you’ll be in a spot like this.

Hug your family a bit tighter today. Love them.

And in the end remember.

That stuff doesn’t matter that much.

Wow, I am overwhelmed by those pictures. Good thinking in not just sitting in the van and pondering things. ( I would have) Thank you for the reminder regarding what’s important
Valerie

I am SO glad you were all ok and that the worst is a burnt foot!! It could have been so much worse. I pray your foot heals quickly and completely.

As a pertinent side note, your van appears to be a Ford WindStar from around the year 2000? My parents had a 2000 WindStar that had a brake sensor catch on fire with lots of white smoke from the engine compartment. It was apparently a recalled or faulty part about which dealers knew. My parents had theirs replaced after the sensor started burning up while I was driving it! I would venture a guess that this could be exactly what happened to you!

Truth is that you are being watched over, and that God is faithful. Thank you for sharing your story. Stuff is just that, stuff. Sometimes it is hard to see why things happen in our lives. Your attitude about the van is refreshing. You got out with what is most important, your family.

Omg I have been in the exact position before! I met my sister over and we were driving with our kids (then ages 9 months and 3 years) when all of a sudden we could smell something electrical.
We pulled over the car and before you knew it flames started coming out from under the bonnet. We got the kids out and some kind man helped us to get our car seats out, prams and shopping. It was so scary…. I still have anxiety every time I smell smoke when I’m in the car, even if it comes from outside… glad you all are ok- and hope your foot is on the mend

I am so glad you and your children are safe. You are right, it is just stuff. Thank you for sharing.

Oh Rachel I am so glad that you and your children are ok. You’re so right – we attach way too much value to ‘stuff’ when the only thing that’s really and truly important are those people we love. I hope your foot heals quickly xx

Oh Friend! Sorry for your troubles! But, as always, your wisdom is inspiring! Two years ago, we had a sewage leak(yuck!) that totally destroyed the first floor of our home. Insurance didn’t cover anything, because the pipe that caused the flood was outside our house. I am not going to say that it was easy, and every day was handled with grace, but boy did we learn about love! My daughter was two at the time, and my biggest fear was that her little world would get confused. With the help of true friends and family, I should have known not to worry. My husband, baby girl and I made it through the “yuck” and made the moving around an adventure for her. You are so right. It is always just stuff. Love to you!!!

So happy you are all safe!
You’re right, it’s just stuff. It can all be replaced. But you and your children can’t. Big hugs ❤

That is just crazy! But you are so right: it IS just “stuff”. And “stuff” can be replaced. So thankful you and your family are safe.

So relieved that this didn’t end in any tragedy. Speedy recovery Rachel.

So scary. So glad everyone is safe. Our family went through a horrific, total-loss house fire three years ago, and everyone (including our cat!) got out safe. In the end, it was all just stuff, too. Thanks for posting!

My van did that Dec 26 2015.. sitting in our driveway. Thankfully it didn’t do that the day before while me and 3 children in car seats were taking the 2 hour drive home from the children’s hospital. They go up fast. Mine was a Nissan Quest. What was yours?

I am so sorry you had that happen too. It is horrific. Mine was a Ford Freestar.

Praise God! So thankful for your safety, praying for all your needs being met.

I really needed to hear that today! My home I bought and lived in for 19 yrs. Is forclosed! It was mine! The only home my 11 yr old son has known. He also has a older brother whose handicapped severe cp. Worried about them more then me! Then I look at my stuff I’ll have to pack up! Don’t know what I’m going to do with it all, even know it stuff 19 yrs of it! I was hoping and praying for a miracle to save my home! My kids are fine, but I’m still scared and worried! Some say look at it as a fresh start, I want the fresh start in my home where I’m now! Not somewhere else! Where can I find the joy in that? Trying but having a hard time? What can I do?

Thank God that you and your family got out alive and safe. Electronics and papers can be replaced, but precious lives can not. Thanks for sharing and I pray for healing for you and your foot. To God be the glory and have a blessed day.