Latest Trends
dear sweet mom who feels like she is...
just do the dishes. please. the kids will...
to my kids – the raw truth of...
a mom that shows up
to the mom who lost her heart
i forgot how to be the happy mom
what single moms need friends to know during...
2020 Mindset Goals
to the mom who keeps going
the lesson of the fallen Christmas tree
Home Homeschool do you know What’s in the Bible? {fabulous review}
Homeschool

do you know What’s in the Bible? {fabulous review}

Do you know What’s in the Bible? 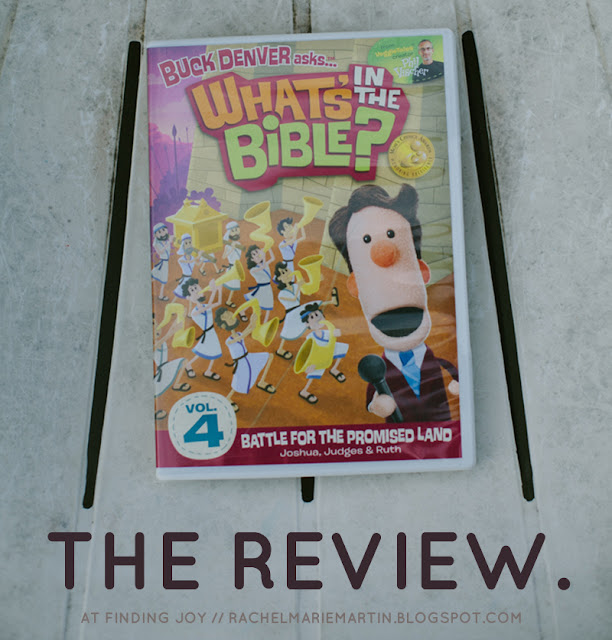 I’m sure you’ve seen What’s in the Bible’s logo – it’s on sidebars, facebook, and twitter. But how much do you know about What’s in the Bible? Well, let me tell you I thought I knew What’s in the Bible?, but I found out that these amazing dvds produced by the Phil Vischer {yes, if you’re thinking Veggie Tales then you are totally right} are way more than just an entertaining dvd {which, by the way, they totally are} but are also an excellent and beautiful tool for teaching kids {and adults} about what really is in the Bible. They are Biblically and historically accurate and delve into tricky concepts and explain them in an easy and understandable way.

Our family has spent the last couple weeks watching What’s in the Bible? Volume 4: Battle for the Promised Land Joshua, Judges, and Ruth. By the way, I originally wanted to wait to open the dvd so I could capture some fabulous pictures of them unwrapping it, but the excitement level in our home over the new What’s in the Bible? dvd  would not wait until the camera was ready. So, instead, I’m asking you to imagine five kids thrilled like crazy ripping off plastic wrapping while their mother tells them to be careful so that the case stays nice since we’re going to be taking pictures and smiling as they race down the stairs to watch the latest episode of What’s in the Bible?. That’s really what happened. There was a loud cheer as well — followed by laughter from the opening scene. {thanks Phil Vischer for your awesome sense of humor and for making my boys laugh and laugh and laugh.} 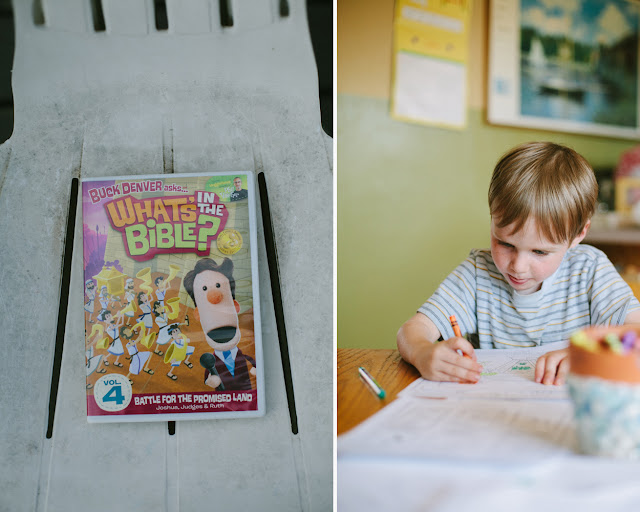 {By the way, our family was already hooked from volume one.}

What we learned in What’s in the Bible Volume 4

Now we’re humming songs from What’s in the Bible? — songs that reinforce sections of Scripture, explain the story of Ruth, and about Redemption. We’re talking about what we’ve learned and having a blast working through the activity sheets that go with each volume. We learned why the books after the Pentatauch  are called the Historical Books. Caleb {pictured above} is coloring pictures of the Judges mentioned in the book of Judges. He learned how Deborah was the only female Judge and how the other Judges dealt with the Cycle of Apostasy with the Israelites {yes, seriously} and then it ended with Samson. Of course the pictures of Samson were met with loud cheers – and then Brennan very seriously remarked – and to think he gave it all up.

The bottom line is that behind all the humor, fabulous visuals, and catchy songs the heart is for kids {and adults} to really grasp Biblical concepts, have a firm and solid Biblical base, and to be confident in knowing What’s in the Bible. 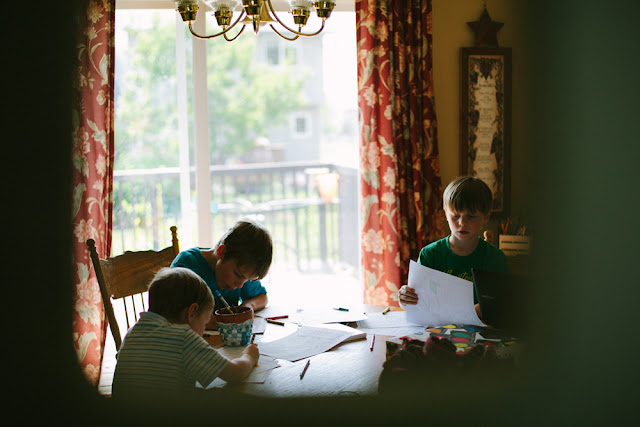 Tell me more about Volume 4:Battle for the Promised Land

What’s in the Bible Volume 4: Battle for the Promised Land {Joshua, Judges, and Ruth} while it is 60 minutes in length, it is actually two independent episodes. The first episode deals with the book of Joshua and the journey into the Promised Land. The second episode talks about the Cycle of Misery and tells the story of Ruth. If you’re kids are like mine as soon as the first episode is done they’ll beg to watch the next. And when that’s done they’ll tell you they need the next dvd. Which is awesome because then they’re learning more about the Bible. 🙂 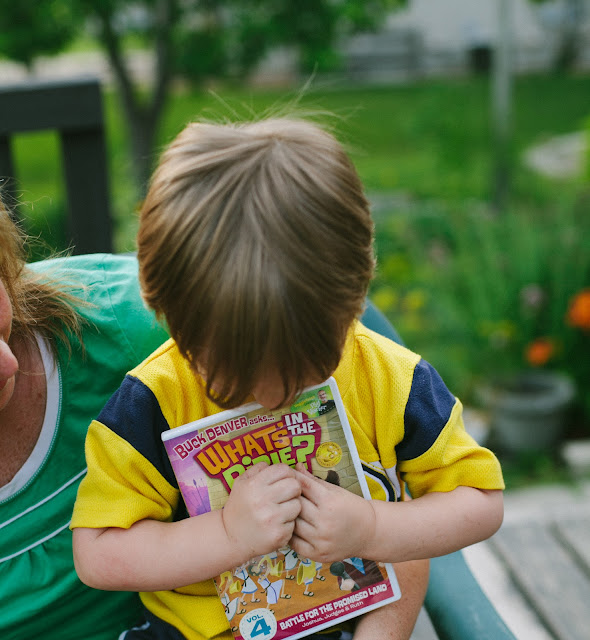 Here’s the cool part – even I learned more by watching What’s in the Bible today. These videos? They can be enjoyed by the whole family and promote discussion. The video below? It’s about the historical books {not the hysterical books}. Watch. And learn. And see why What’s in the Bible? is totally excellent. 🙂

Some of our favorite quotes? {Don’t you love the graphic? My Hannah helped me put it together. And my boys chose the quotes. Except one – I chose the one about Samson because that one made me laugh out loud while I was watching Volume 4 with them.} 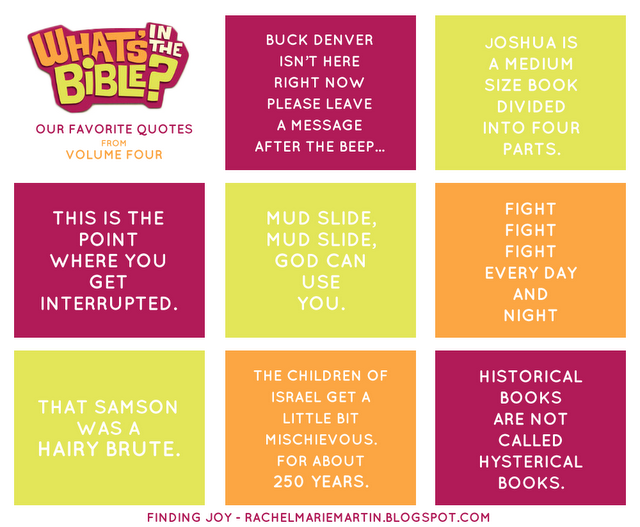 IMPORTANT Get your own What’s in the Bible? Info

1 – To order fabulous this fabulous What’s in the Bible? Volume 4 DVD visit the What’s in the Bible Store to find this episode and the others in the series. These dvds make great gifts, my friends! And while you’re there pop over to the main What’s in the Bible site to snag the coupon for $5 for sharing the site with a friend.
2 – To print out amazing coloring pages that reinforce the dvds visit What’s in the Bible Coloring Pages for Episode 4. I mean look at the concentration on my Elijah as he works on those pages. Makes you want to print them now, doesn’t it? 🙂 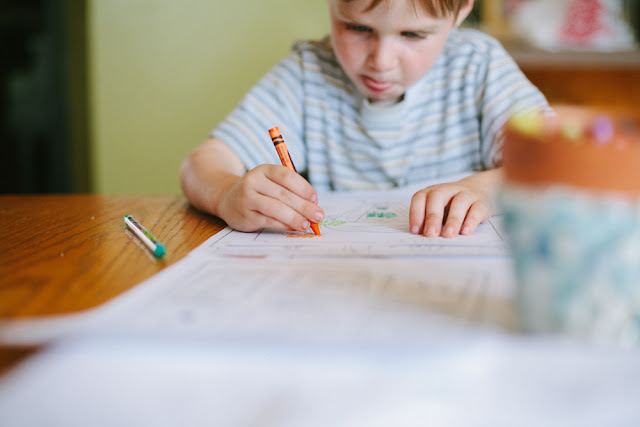 3 – Make sure to join the fabulous What’s in the Bible twitter party today 6/28 at 8pm ET #WITB @whatsinthebible
4 – Want to read more reviews? Visit this What’s in the Bible Review List to find more awesome articles and reviews.
5 – Enter below, today, and right now to win your own copy of Volume 1: In the Beginning You’ll love the dvd. Really.
a Rafflecopter giveaway
and now a bit of closing humor – I’ve included an outtake of us trying to get Samuel to hold his sign…sigh…give me grace…the boy was a bit cranky at that moment. grin. 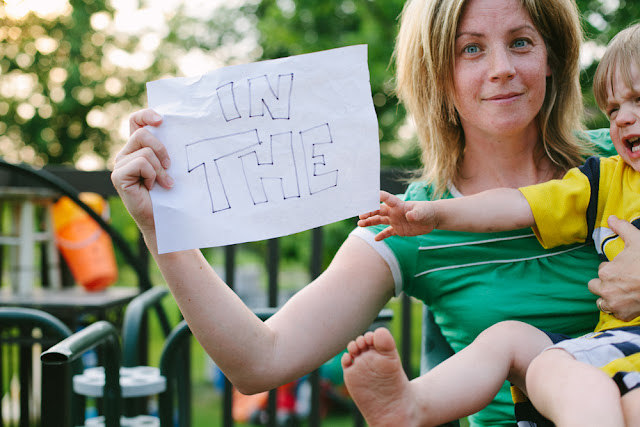 YOU are so creative…. love all the favorite quotes. These DVDs are great, aren’t they??

No, I haven’t seen these but I think they would be great for our growing family!

I have heard of Whats in the Bible but have never watched them. I think my kids would really enjoy them though! 🙂

Loved the pictures up top!! You have beautiful children!!

Yes, we have seen What’s in the Bible and my kids love it!

I am not familiar with this but it sounds wonderful!

We’ve heard of it, but haven’t watched it yet.

I heard an interview on Focus on the Family with Phil a while back and have been wanting to watch since then but just haven’t gotten around to it – so nice to see such awesome reviews! would love to add it to our dvd collection!

Haven’t seen them yet, but WANT to. Er, I mean, the kids want too….

Interesting! I’ve seen them around but haven’t watched an episode yet. Appreciate the review!

1. Love the last photo with Samuel. Made me laugh!
2. I know my kids would love these videos just haven’t gotten them yet.
They love Buck Denver on Jellytelly.
3. Keep up the good work.

Aw, this looks like so much fun! That I could even include my 2.5 year old son in! Would love to win Volume 1!

We have not seen What’s in the bible, but hoping to win so we can!

This is new to me but I love it! Even if i don’t win, I’m going to have to get this series!!

Love your pictures! We have these and plan to use them this Fall for our 7 and 3 year olds. Thanks for another great review!

That looks like a wondeful DVD! It could be perfect to get my preschooler to understand some more in depth information about the Bible.

Thanks, Joy, for the blog. It’s great to know how your family has used the video. I’ll be sure to bookmark this and refer to new families checking out the WITB series.

Hi Joy,
I don’t want to enter the giveaway…but I wanted to say I loved all your photos..and I love that there are tools like this out there that teach kids about the Bible and encourage them to learn more 🙂 🙂 Love and hugs from the ocean shores of California, Heather 🙂

Would love to win this for my family!

We haven’t seen these, but think these would be a wonderful tool for our family! 🙂

Samuel looks like he wants to hold the sign but you won’t let him! ;o) That sweet boy NEVER cries, right?!
Life can be overwhelming at times, but the victory is ours through Christ! Put your trust in Him! Praying!
1 Corinthians 15:54-57 So when this corruptible shall have put on incorruption, and this mortal shall have put on immortality, then shall be brought to pass the saying that is written, Death is swallowed up in victory. O death, where is thy sting? O grave, where is thy victory? The sting of death is sin; and the strength of sin is the law. But thanks be to God, which giveth us the victory through our Lord Jesus Christ.
My email address

We love What’s in the Bible. I’m a bit behind the times though and didn’t realize that there were so many out. I hope our library has some of the newer ones!

No we haven’t seen any of the What’s in the Bible DVDs. I hear great things about them and want to see what they are like.

I saw these DVD’s at Family Christian Store, and was wondering if they were any good. You convinced me. When Ethan gets a little older (hes only 5 months now, lol) we will add them to our collection. Thanks 😉

i’m so glad you posted this! i’ve debated buying this a dozen times. you’ve convinced me!

I have never seen it but would love too since I have heard so much about it!

I have read so much about these DVDs! I’ve seen a few short clips online, but we have not had the pleasure (blessing) of watching an entire episode yet. Thanks for this fun and real review!