Latest Trends
dear sweet mom who feels like she is...
just do the dishes. please. the kids will...
to my kids – the raw truth of...
a mom that shows up
to the mom who lost her heart
i forgot how to be the happy mom
what single moms need friends to know during...
2020 Mindset Goals
to the mom who keeps going
the lesson of the fallen Christmas tree
Home perspective Children JUST MIGHT remember their best day of television
perspective

Children JUST MIGHT remember their best day of television

That’s a quote I just read that I think we should have a conversation about. And at first, when I read a cute graphic with it I thought, “oh that’s interesting.” But then I felt a bit, okay a bunch, of guilt as I looked at my kids playing on their phones. I actually started qualifying my mothering goodness based on my kids being on their phones or playing the WiiU or whatever you want to add in there.

I started to not like that quote as much. This is why:

As I watched my kids, still with the mom media guilt remnants, I remembered how some of my favorite memories of childhood were sitting with my parents on Thursday nights watching The Cosby Show and Family Ties. I can tell you how my mom would make frozen pizzas and they would get a 2 liter of Sprite and we would eat downstairs and use the personal trampoline (remember those round things?) as the table. I can still hear the theme song and remember the excitement of coming home and realizing that tonight was Thursday.

I love that memory.

You see, I think I don’t really like that quote.

I get the sentiment, I really do. None of us want to be the parents who get the label of zombie eyed television watching destroys your brain kids. But, and please hear me out, I think it puts stipulations on parenting and what is important to our kids. The bottom line assumption is that television cannot provide a great memory.

Ahem? Is that really true? And is it true for this day and time?

Maybe you can’t do all the cool trips, but you do sit together and watch a movie. Maybe your nine year old loves Vat19 and you two sit and laugh over silly videos. Maybe you all are inspired by America’s Got Talent and can remember the courage of someone on the screen.

Maybe all of our stories and what we remember is different. And we ALL KNOW the pressure about media and screen time and television. And funny, my kids don’t even really watch television, but they do watch a whole bunch of Youtube on their phone.

But, that doesn’t necessarily make it bad. Do you know how much stuff my kids have learned too? You see, the culture is shifting. We don’t live in an encyclopedia ladened world and having to go to the library to research. They have knowledge at their fingertips. My thirteen year old is a walking trivia champion due to his constant searching on Google and watching of Youtube documentaries. That is still learning, my friends, still learning.

Maybe it isn’t a book.

But you know things changes and we either adapt with it and embrace the good in the new or we try to recreate what once was. I’m sure there was a time when parents were told rock music would destroy their kids brains. Tell that to the parents whose child ended up making a career from music.

What I really think we need is balance.

Because there are some of us that are working so hard to just make it through and provide.

Because there are some of us who need a break and sometimes Netflix is the answer.

Because television and the computer and the phones aren’t intrinsically going to ruin our kids.

We are all trying.

So, yes, children probably won’t remember that hour. But, my friends, that is one of my favorite memories. So before we throw it all out – remember the amazing things that can happen from media too. Many kids are becoming entrepreneurs and inventors and creators – because of media. My kids can FaceTime with their siblings who live almost two thousand miles away. We rent movies and watch them as a family together. And my thirteen year old will look up Marvel facts. In fact, when Stan Lee died my family watched Thor in honor of him. And then we read, online, a tribute to him on CNN. And my youngest said, “maybe I could make movies like him….”

And that’s pretty inspiring too.

So take those quotes about media and television with a grain of salt. And for sure no guilt. Because my friends, if my parents had told me that all that television or computer time or Nintendo time would never amount to anything, well, then I never would have learned to code and I might not be here now. With a business that supports my family. Online. Or my book -> The Brave Art of Motherhood

To me it’s about priorities, balance and not judging another mom.

And maybe your best includes the best hour of television that your kids will remember forever.

Because beyond Thursday night television one of my favorite memories of childhood was watching A Charlie Brown Christmas with my folks, on you guessed it, the television.

By the way – that’s my son Elijah on “what do you want to be when you grow up day?” last year at school. He choose a Youtube star.

I thought that was an awesome choice. 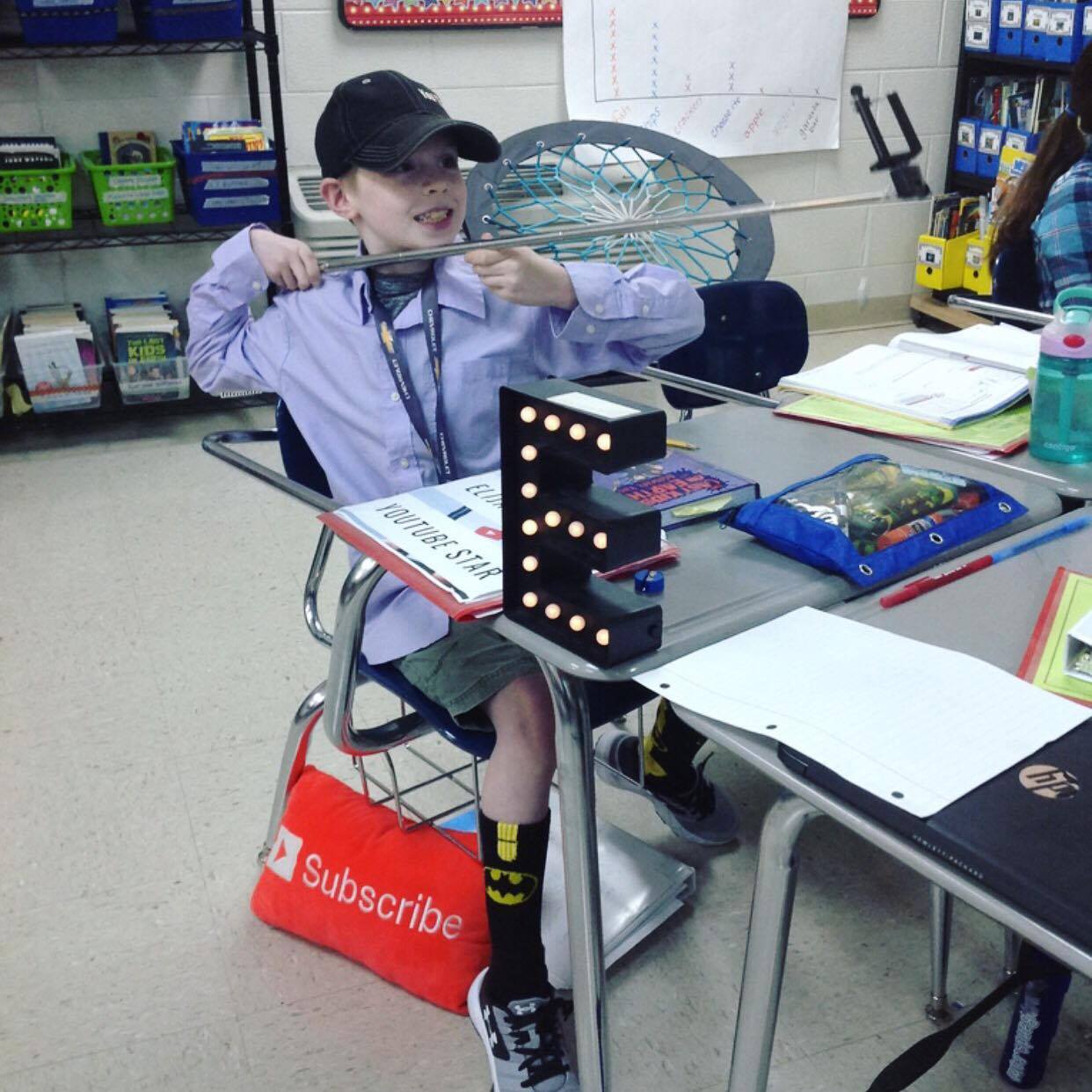